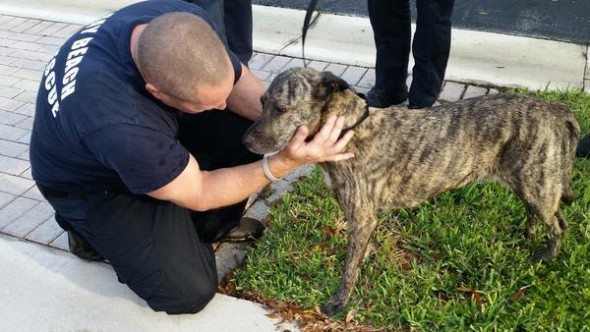 A firefighter was able to pull a dog that had become stuck in a sewage drain out after it decided to chase a raccoon into the very tight fitting space.

Mark Siciliano, a veteran firefighter responding to the call, braved waist deep sewage water to save the dog’s life as it barked and panicked underground.  He descended a ladder into the hole the two animals were stuck in.

The pipe was about 36 inches and half full of water.  The dog was about 20 feet away from the grate, between the firefighter and the raccoon.  When Siciliano got into the pipe, the captain of the Special Operations team got the dog to come right to him.

Residents nearby were captivated by the drama unfolding.  As Siciliano brought the dog out of the drain, the locals tried to calm the frightened dog, giving it some water and a treat.  They even gave her a nickname, Brynn.

“Such a sweet dog, it was so friendly and really seemed to like the attention,” said local resident Frances Weeks.  “I really hope she finds her way back home.”

Authorities confirm the dog is micro chipped, and should be returned to her humans quickly.  Currently residing at the Palm Beach County Animal Control Center for the time being, her humans will have five days to appear and claim her.  After that, she will be offered up for adoption.