Hero Dog Saves Woman from Being Raped at Knifepoint 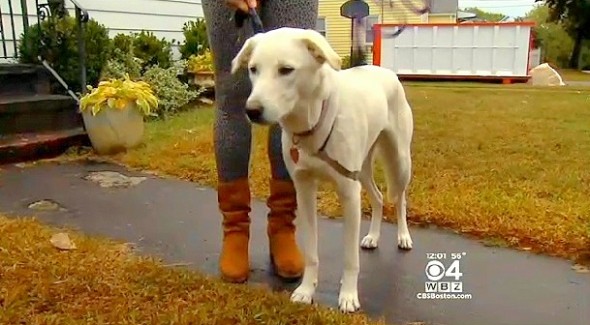 A young mother in Saugus, Massachusetts avoided being raped and was spared her life because of her dog Rosie, who made such a ruckus that the assailant quickly fled the area.

A woman named Lisa was out for a run with her dog on Tuesday night when a man appeared seemingly out of thin air and pushed her against a tree.

“He grabbed my hair and my shirt from behind and whispered in my ear not to scream, I have a knife,” she told WBZ-TV. “I stayed still and that’s when he kind of groped my body.”

All she could think about was being able to get home to her kids, so she complied with the man’s orders while pleading with him.

Lisa tried to break loose by thrashing her head around and flailing her arms, but her attacker punched her in the face.  Rosie started freaking out and barking, which lead to the other neighborhood dogs joining in.  All the commotion caused the man to take off.

Only a block away from home, Lisa ran there with Rosie and called police.  Her husband walked around the neighborhood to warn others about what happened, and they couldn’t believe such a thing would occur in their quiet community.  Despite what happened, Lisa refuses to live in fear.

Police are on the lookout for the tall, thin man, aged around 20.  He was wearing cologne, a long-sleeved red shirt, dark pants and clean white sneakers.  He may have had a vehicle nearby.