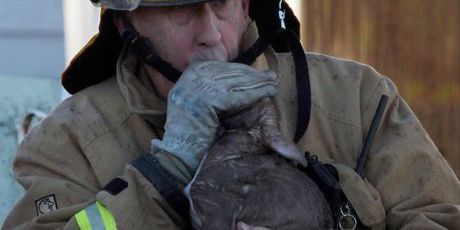 Firefighter Gary Wilson didn’t hesitate or think twice about giving a puppy mouth-to-mouth resuscitation when he rescued her from a fire.

When firefighter Wilson pulled sixteen-week-old pitbull cross terrier Missy out of the fire in Waganui, New Zealand she was barely alive. He quickly used his hand to make a funnel at the puppy’s nose and began to resuscitate her.

“It’s just a natural [reaction],” said Wilson. “Part of our training is all about protecting and saving life and then [worrying about] property. You just do it – the instinct is to save anything.”

When Missy was initially found in the fire they believed her to be dead, but as another firefighter passed her over to Wilson she twitched. Knowing there was still a chance Wilson began resuscitating her. Once out of the fire Missy was then given oxygen and rushed to a nearby veterinary clinic. She was monitored overnight but went home the next day, recovering remarkably well from her smoke inhalation.