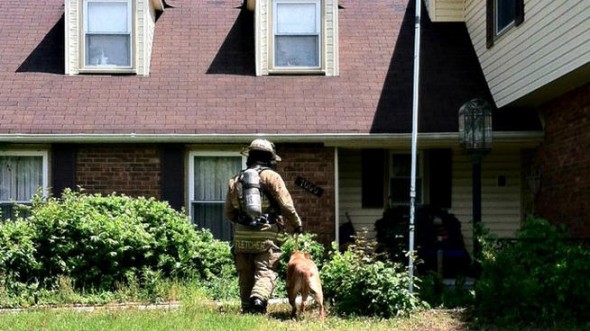 Firefighters in Prince George, Maryland went above and beyond last week when they rescued a dog from a gas leak.

When James Hunt returned home last Tuesday afternoon he found the following note written on a piece of cardboard:

“There was a gas leak outside of your house & we had to break your door in to make sure no one was home. Once in, we found high levels of gas & had to get your dog outside to fresh air. She was scared at first, but came outside after some coaxing. She pee’d and pooped around noon & hung out with us at the fire truck. We put her back inside & gave her fresh food & water.”

Firefighters from the Morningside Fire/EMS Station led by Firefighter/Medic Donny Fletcher had been going door to door in the neighborhood after a contractor broke a gas line. They were evacuating homes and when they got to the home James Hunt they found Duffy all alone. They not only brought her outside to fresh air, but gave her food and water and opened windows in the home so it would be safe for Duffy to go back inside.

“I was ecstatic,” said Hunt. “They made Duffy feel comfortable. She was happy.”

Hunt wanted to make sure people knew about the extra effort the firefighters put in and sent a letter to local government leaders expressing his gratitude and explaining how the firefighters had gone above and beyond their duty to help Duffy.

“I would not expect anyone to take care of a strange dog,” wrote Hunt. “This was truly going above and beyond the call of duty and I wanted to take the time out to say thank you.”

2 thoughts on “Firefighters go Above and Beyond to Help Dog”