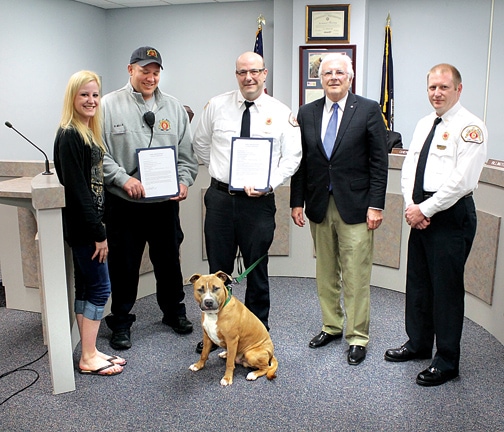 Firefighters were honored on Thursday for saving the life of Whiskey, a dog they pulled from a house fire and then performed lifesaving CPR on.

On March 12th firefighters were dispatched to the home of Lauren Feranec. Neighbors informed firefighters that Feranec’s three dogs were inside. All three dogs were pulled safely out of the burning home but Whiskey wasn’t responding. Fire Marshal Dickie Walls and acting assistant chief Brian Mills immediately began perform CPR on Whiskey.

After ten minutes of CPR Whiskey began to breathe on his own again and regained consciousness. “The actions of Fire Marshal Walls and Captain Mills this day went beyond the normal efforts expected from a firefighter and represented the City of Murray Fire Department in a very positive manner,” said Assistant Chief Matthew Tinsely, who presented the two men with certificates.

Feranec also spoke at the ceremony, expressing her gratitude. “So many times, people ask me, “Were there family members inside? Were any loved ones inside?’ My dogs are my children. They are a big wild herd,” said Feranec. “These men not only got them all out of the house, but then brought one completely back to life, and there is no amount of thank-you’s that I can ever say in the entire world to let them know how much that means. So on behalf of me, ‘Whiskey’, ‘Rascal’ and ‘Joe,’ thank you guys so, so very much.”