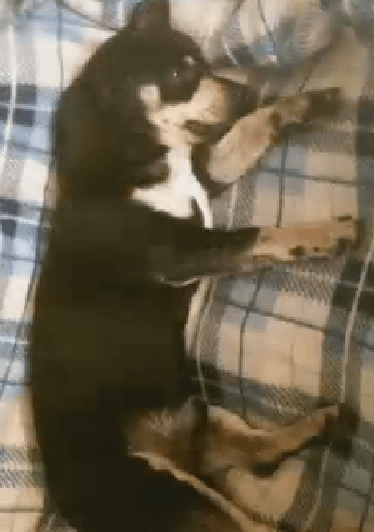 Last Saturday a puppy was found severely injured after being hit by a car in Richland Hills, Texas. With no owner the dog was brought to a shelter that couldn’t afford to give him the treatment he needed. Thankfully animal lovers in the community stepped forward and raised the necessary funds to help the dog.

Police received a phone call from two girls who spotted the injured dog while playing in a field. City animal control officer Elizabeth Jensen responded to the call and found the dog behind a dumpster. “He was definitely in pain,” said Jensen. “And I just wrapped him in a sheet, rand down to the shelter, loaded him in my truck, and headed to the emergency clinic.”

When the dog, that has been named Henry, arrived at the clinic he was barely breathing or moving. He had five broken ribs, a hernia and severe bruising. “All he could do was lift his head,” said Jensen. Henry would need very expensive surgery to help him recover and the shelter didn’t have the funds for it. Word got out in the community about the dog in need and people started to come forward with donations. In total $2200 was donated to help the injured stray.

Now with the community’s help Henry has a fighting chance. He is now recovering from surgery and once recovered be ready for adoption. “It’s overwhelming,” said Jensen. “It’s just overwhelming that there are so many people out there that see a little dog who’s injured and they reach out and help.”

2 thoughts on “Community Comes Together To Save Injured Dog”