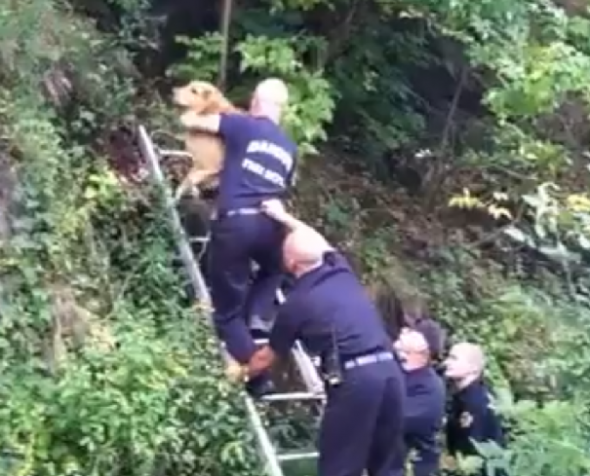 When a Golden Retriever in Bangor, Maine became stuck on a cliff, firefighters came to the dog’s rescue.

On Wednesday night people noticed a scared dog atop a cliff and flagged down a passing police officer. Firefighters were called to help bring the dog down to safety.

Firefighter Bruce Johnson climbed a ladder to reach the dog. Johnson made friends with the dog before helping to bring the dog down the ladder.

“The dog was very friendly, just shaken and scared, covered in mud,” said Johnson. “I got him down approximately ¾ of the way before the dog started to squirm and kind of got away from me, dropped out of my hands, landed about 3 feet down.”

Bangor City Councilor Ben Sprague happened to be driving by when the rescue occurred and he stopped to take video of the rescue, which he later posted on YouTube.

The dog’s family arrived just before he was brought down to safety. Apparently the dog, who was still wearing his leash when he was rescued, had slipped away from his owners while being taken for a walk. The dog had been missing for about two hours before he was spotted on the cliff.

The firefighters are happy with the outcome of the rescue and proud too.

“People got their dog back,” said Johnson. “It’s a feel good thing for us. That’s what we’re here for, that’s what we do.”