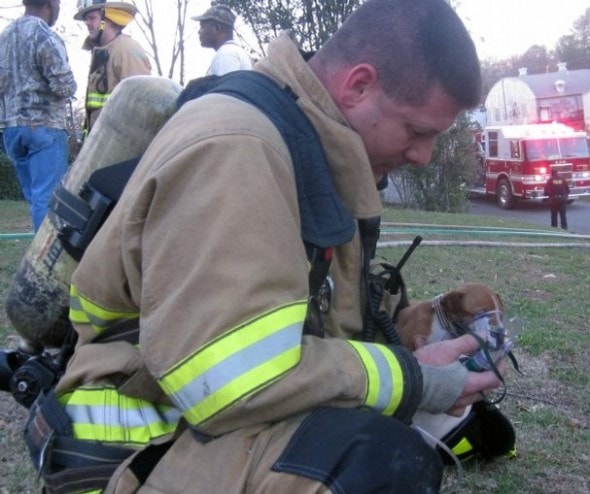 When Django was brought out from his burning home he wasn’t breathing. Thanks to the efforts for firefighters the six-week-old pit bull is alive and well.

Django was home alone early Wednesday evening when a fire started in one of the bedrooms of his family’s home. Neighbors reported the fire and the Anderson Fire Department arrived on the scene. Django’s owner, Wesley Maddox, arrived just moments before Django was brought out of the fire.

The puppy wasn’t breathing when firefighters found him but as, he emerged from the smoke-filled home cradled in one of the firefighter’s arms his tiny eyes began to open. Another firefighter ran to retrieve a medical kit and a miniature oxygen mask was placed over Django’s nose.

Maddox stood nearby nervously watching as firefighters worked to save his puppy. Django slowly came around and Anderson Fire Department engineer Bruce Reeves handed Django and the oxygen mask over to Maddox. The home suffered moderate damage, but thanks to the quick work of firefighters Django was saved.