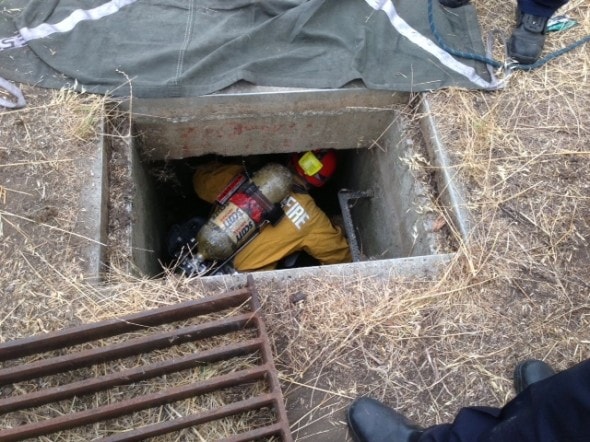 Firefighters in Sacramento came to the rescue of a dog that had been bound and abandoned in a storm drain.

A witness spotted two people get out of a car around 5:40 p.m. with the dog. The two then forced the dog into the storm drain and took off leaving the dog to die. The witness reported the incident and firefighters arrived on the scene to help the dog.

First the firefighters used air monitoring devices and ventilation equipment to improve the air quality for the dog while they worked on freeing him. Firefighter Nick Mack equipped with a breathing apparatus was lowered 15 feet to the bottom of the drain and then crawled to the abandoned dog.

“We all have dogs, and we all love dogs,” said Sacramento Metro Fire Battalion Chief Maurice Johnson. “We are just glad to be able to give this guy a second chance.”

Sacramento Police are investigating the incident and are urging anyone with information to come forward.

0 thoughts on “Firefighters Save Abandoned Dog from Storm Drain”