During the visit, the Backes expressed amazement at the size of Best Friends Animal Sanctuary, which sits on more than 3,700 acres and is surrounded by some 17,000 acres of undeveloped land in Utah’s scenic red rock canyon country. They were also moved by the stories of Best Friends’ founders who built the sanctuary “from the ground up” and who came together and worked hard to make it successful. David Backes said it gave him inspiration to “dream big” for his own future charity.

Especially impressive was the Backes’ willingness to help, rather than just be spectators, lending a hand in some of the day to day chores of the shelter. David even offered to scoop up poop by saying,

“I’m a pro at that. We have plenty of practice with our own four dogs at home. “ 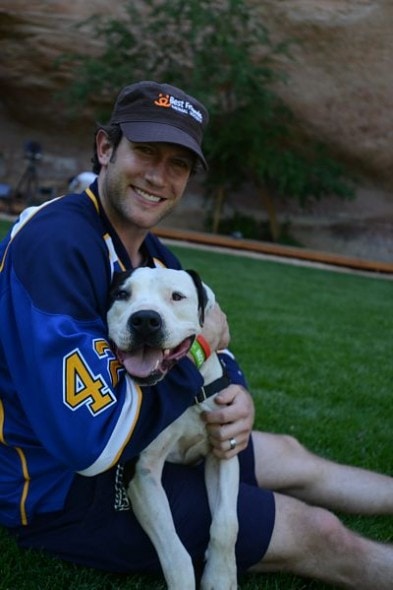 The couple also spent the night with one of the sanctuary’s dogs, a Pit Bull named Vince, through the sanctuary’s Best Friends sleepover program. The program allows for an animal to be “checked out” for a night, giving them one on one time with people in a home setting and allowing staff to see if the pet is ready for family life. The next day, David Backes donned his jersey in a photo with Vince.

After his visit, David Backes said he is more convinced that “the only way to save the lives of millions of animals in shelters is to focus on the big picture, to fix the problems of why animals are going into the shelters.”

Best Friends Animal Society is a national welfare organization building no-kill programs and partnerships that will bring about a day when there are No More Homeless Pets. The society’s leading initiatives in animal care and community programs are coordinated from its Kanab, Utah headquarters, the country’s largest no-kill sanctuary. This work is made possible by the personal and financial support of a grassroots network of supporters and community partners across the nation.