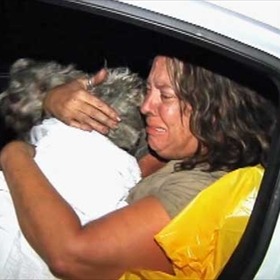 A family in Brevard County, Florida thought they had lost their dog Wednesday night when a fire broke out in their home. Firefighters were able to save the dog after finding her hiding underneath a bed.

When firefighters arrived at the home late Wednesday night flames were shooting out of the home. Two adults and another dog had made it safely out of the home, but one dog was trapped inside.

Firefighters went in the burning home and firefighter Keegan Logan found the dog hiding underneath a bed. The dog was unconscious but paramedics were able to revive the dog using an oxygen mask.

When paramedics reunited the dog with the homeowner she burst into tears.

“Thank you so much,” said the woman. “I thought she was dead. God bless you.”

1 thought on “Firefighters Save Dog Hiding under Bed from Fire”