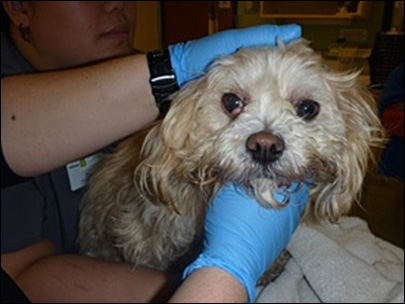 Officials believe an abandoned Shih Tzu had been left with a rubber band around its mouth for at least a week when two young girls came to its rescue.

On Sunday evening, Emma Sample, 13, and Savannah Graham, 14, were taking a walk in their Portland, Oregon neighborhood when they came across an abandoned dog in need of help.

“It was shivering so we brought him to her house and we found out he was bleeding from his mouth and his chin and it was all running down his stomach,” said Graham.

The dog was rushed to the Dove Lewis Emergency Animal Hospital that night. The rubber band had been so wrapped so tightly around the dog’s mouth that it had cut down to the bone.

Mulnomah County Animal Service is asking anyone with information about the dog or their owner to call 503-988-6238. The dog will be in MCAS custody while the situation is investigated.

The girls are happy that they were able to get the dog the help it needed.

“No dog should be like that,” said Sample. “They should be in a loving home with family.”

Sample’s family are going to be given the opportunity to adopt the dog once it become available for adoption.