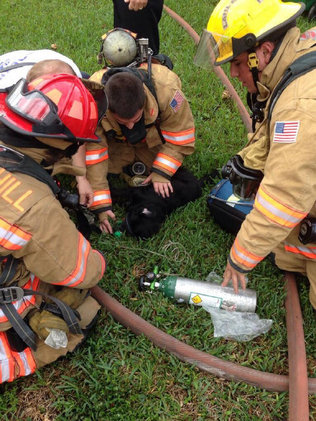 A family in Lauderhill, Florida lost part of their home to a fire on Wednesday but they are celebrating what they didn’t lose. Firefighters pulled their dog Poochie out of the blaze and were able to revive him.

Poochie was home alone when the fire broke out late Wednesday morning. When Marcia Powell returned home from shopping for groceries her home was filled with heavy smoke and she was unable to get inside to try to help Poochie.

“The first thing in my mind was Poochie,” said Powell. “Poochie was inside. I don’t even remember calling 911.”

When firefighters arrived on the scene they went inside to find Poochie. Firefighter Eric Perez found Poochie and brought the unconscious dog out of the smoke-filled home. Once safely out of the house Firefighter Perez began performing CPR on the dog.

Paramedics then started using an animal oxygen mast to revive the five-year-old dog. They rushed Poochie to a nearby animal hospital where veterinarians expect Poochie to make a full recovery.

The Powell family is relieved and thankful that firefighters were able to save Poochie. When Marcia Powell’s husband received news of the fire he didn’t worry about his house, but rushed to the animal hospital to see Poochie.

The firefighters are also glad Poochie is doing well and are happy they were able to save his life.