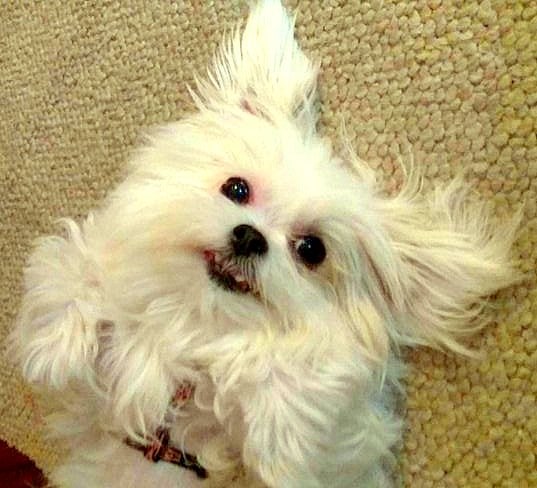 This comes from The Animal Rescue Site, which, in addition to featuring fan-submitted rescue stories, offers a wide selection of clothing, jewelry, home décor, pet supplies, and other gifts.  For each purchase made, sponsors donate food to shelter animals in need.

Submitted by Joan B. of St. Petersburg, FL:

I was walking a husky and a chow mix for a client (I’m a pet sitter) when I noticed a woman in her driveway with a little unleashed dog toodling around at her feet. I asked her to make sure her little dog didn’t run up to my big dogs. She said he wasn’t hers, she was on her way out and he was covered in fleas so she didn’t want him in her house.

By this time the dog had seen my dogs and bolted. He stayed in view for a while and I saw him go up to two other people. He was clearly asking for help but they each shooed him away.  Heartbreaking. Then I lost sight of him.

I got my dogs back to their home, then drove around and around until I spotted him. He came right over. He was dirty and scrawny and his back end was raw and half bald from the chronic fleas. I told him, “You’re just a little monkeybutt aren’t you?”

I put him in a crate I always keep in my car. He put his chin on his paws and heaved the biggest sigh his little self could heave. He was not microchipped. The vet estimated about three years old. I posted him on our local lost/found sites but no one came forward. My plan was to bring him back to good health, get him neutered and then find a good home for him.

I am a cat person and wasn’t prepared to take on a dog with my seven-day a week pet sitting schedule. But Monkey had a plan of his own! He’s been with me for a year now, he gets along with my cats and I wouldn’t change a thing.