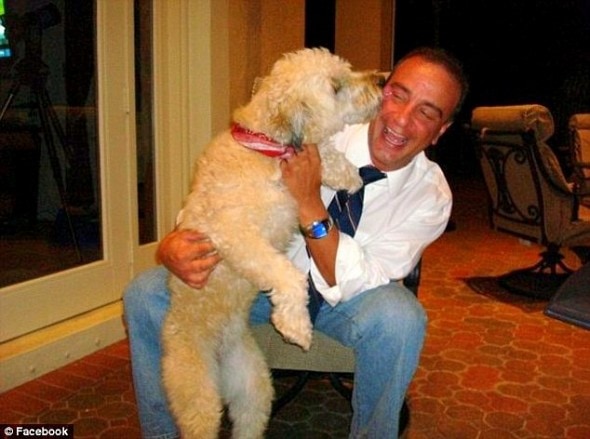 A Florida man suffered second-degree burns to 25 percent of his body when he saved the life of a dog who had caught on fire by thinking quickly and grabbing her and jumping into a swimming pool.

Telma Botcherby was treating her dog Ruby with a flammable tick and flea spray when she spotted a live tick on the floor. She attempted to burn it with a lighter, but the action startled Ruby. The dog jumped over the open flame and caught alight.

“We believe that the flame was not actually very close to the dog when they were trying to burn those ticks,” said Mike Moser from the Coral Springs Fire Department. “The dog became startled by the flame, ran toward, then jumped over the lighter that obviously had a flame on it and that’s what caused it to catch fire.”

In a panic, Telma began screaming for husband Jess Olivas to help. He scooped up the poodle mix and jumped into the pool with her. Jess was taken to North Broward Hospital and later transferred to Jackson Memorial after suffering burns to his chest, face and arms.

The family could not afford to take Ruby in to the emergency vet, but deputies and fire rescue workers scoured the area to find a vet who could treat her. She was taken to Dr. Peter’s Animal Hospital the next day to be treated for abdomen and leg wounds at no cost.

The vet working on Ruby said Jess likely saved her life when he jumped in the pool.

“The owner courageously saved the life of the pet and unfortunately, at the same time put himself in grave danger,” Dr. Peter Krolikowski said. “I got all its appropriate medications, so from that point of view I feel optimistic and she’s a wonderful dog, we do hope we will bring her back.”

Ruby is in too much pain to sit and still shakes sometimes, but vet tech Jamie Duffey said she’ll recover.

“Even happy, healthy dogs are sometimes challenging to work with, so she is an angel and I’m happy to say that given the circumstances she is in pretty good spirits,” Duffey said.

4 thoughts on “Florida Man Risks Life to Save Burning Dog”