Dogs are very social creatures, and they put their remarkable sense of smell to great use. The way they gather information from sniffing is their form of social networking. 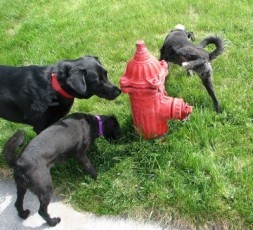 If you’re at all familiar with Facebook, it’s not hard to make the connection between your social network and your dog’s community of scents. We typically use Facebook to stay connected with our friends and friends of friends. Dogs connect with other dogs by using their noses. When a dog makes his mark by peeing on something, he leaves a bit of himself behind for other dogs to share—similar to leaving a comment on Facebook.

Just as we “like” a good post, a dog “likes” a good, pungent scent. Other dogs know by sniffing who has been to the same spot. There’s a scent that says Trixie, the French poodle, has left a comment about visiting the local dog park. Or, Butch, the Bull Mastiff, has just moved into the neighborhood.

Male dogs are more likely than females to leave comments on tall or prominent objects. My female dog Tasha sniffs eagerly at places where other dogs have been, and she certainly “likes” them, but is rarely motivated to leave a comment of her own.

The more likes and comments dogs add to their object of choice, the more defined the odor, and the more sniffs it gets. Dogs follow scents from one fragrant, urine-stained object to another, just as we follow people on Facebook to news stories or websites that interest us. Dogs might not recognize each other’s scents, but the more they sniff certain areas, the more familiar they become with the dogs that have recently marked it.

A sign post can convey up-to-date information similar to a post on Facebook. Both provide a great way to keep up with your pals. Just as online social networking sites encourage you to add new people as friends, dogs encourage other dogs to add their own scent to the same sign post.

Popular Facebook pages get more attention, as do dogs that have recently rolled in something particularly pungent. A dog in heat causes other dogs to sniff like mad. On the other hand, a dog that has recently been bathed won’t leave as much of a scent behind.

And just as we shut down our devices and leave Facebook for awhile, dogs eventually go home and leave their community behind, waiting for their next opportunity to go for a walk and catch up with their friends and friends of friends.