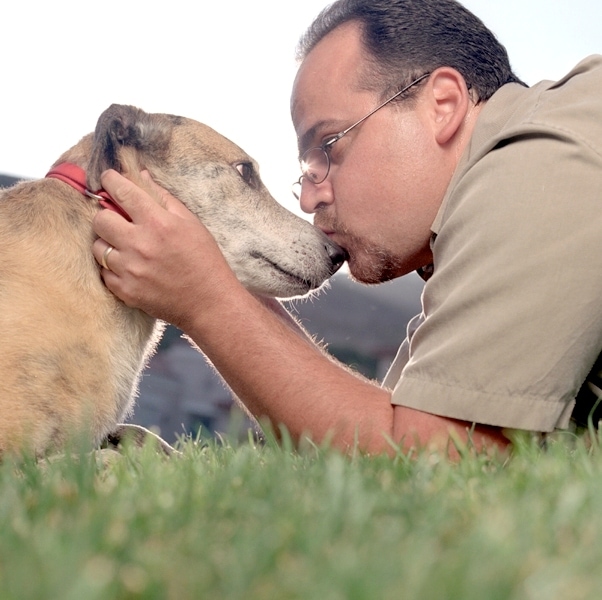 Pickles has been my constant companion for all but seven weeks of his life. I adopted him and his brother Topham together many years ago. They were the last two pups of a litter born at the San Francisco SPCA on July 1, 1999. Their mother was due to be spayed in the low-cost clinic, when she gave birth in the shelter the night before.

My views were much less enlightened back then, or I would have lobbied for an end to spaying obviously pregnant animals. Killing is killing, even if the puppies are not “technically” born. But there they were, five beautiful little wiggly chunks, and seven weeks later, two came to live with us. And for 12 years were seldom apart, from each other and from me. When Top-Top died in 2010, Pickles took in pretty hard. More than that, it seemed to have aged him—a lot.

I doubt that is true. The fact of the matter is that I didn’t have Topham to compare him to and that showed me Pickles as he truly is. Because while Topham was old, Pickles appeared young by comparison. While Topham had been sick for awhile, Pickles remained healthy. While Topham slowly climbed the stairs from the ground floor, Pickles bounded up them. When Topham needed to be carried up the stairs, Pickles continued up and down. When Topham couldn’t wait outside to go to the bathroom and started having accidents in the house, Pickles dutifully waited. When Topham slept by the bed because he could no longer get up and down it, Pickles could still leap in and out of the minivan. But when Topham died, Pickles seemed to grow old overnight.

At almost 13, I suppose I shouldn’t be surprised. But I don’t need to look at a calendar. Aside from the daily regimen of pills I have to hide in his food, you can see it on his face: the gray muzzle, the cloudy eyes, the lines on his face, the heavy breathing. You can also see it on our walks. He used to sprint ahead, and now he can barely keep up. His back legs are stiff, arthritis taking over, so he moves slowly. If we are away too long, he, too, now has his share of accidents in the house.

You can also see it in his behavior. Though he is deeply loved by my wife and is around her and the kids 24/7 when I travel, he suffers when I am out of town, watching the door, hoping for my return. I wonder if knows our remaining time together is not as long as it once was. I carry him up and down the stairs because he isn’t sure footed anymore. He slips, and more than once came tumbling down. This morning, I taped down carpet runners on our tile and hardwood floors, hoping to make it easier for him to manage them and give him some independence.

Aside from a daily walk and me, there are few things in life Pickles loves more than a ball. Every night, before we settle in, I throw it and he retrieves it. It used to take a half hour or more. Now, after two or three tosses, he’s wiped out. He settles on the bed and breathes heavily. When he sleeps, his body is pressed against mine and I feel for him in the middle of the night, laying my hand on his chest to feel the rhythmic up and down that lets me know he’s still there. A couple of times, I found myself whispering in his ear, asking him to please not leave me. The thought of his death fills me with dread.

I became a No Kill advocate because to me, death is the ultimate cruelty; a frightening emptiness that leaves nothing but pain for those of us left behind. How is it possible that someone you could love so deeply, someone who defines your place in this world—your wife, a parent, a child, your dog—can suddenly be gone. Someone who you will never see again. A voice you will no longer hear. Forever.

When I think of how callously lives are ended in what we euphemistically call “shelters,” how cavalierly they are killed, sometimes cruelly and without a moment’s hesitation; animals who were once as deeply loved as Pickles is or animals who were never even given a name, I feel grief. And anger. It’s unthinkable that we would allow this to continue, creating voids that can never be filled.

After Topham died, I still found myself looking for him, sometimes calling him from the dark when I woke up, quiet and careful not to wake my wife. “Come on Boys,” I’d call softly, but only Pickles would be there to heed the call. Soon, not even he will answer. How could that be?

I suppose some think it macabre to entertain such thoughts, but I can’t help it. I live at home, I work from home, and he is there, every minute of every day, my shadow. And when I think about Pickles just a few years ago, how boundless his energy was, how many times he would chase and retrieve a ball, how far he could walk, yanking on the leash to get here and there, how he used to greet me by putting his front legs on my shoulders, standing tall on his two back legs, looking at me eye to eye, I am overcome with a sense of loss.

He can’t do those things anymore without a struggle, some of them not at all. I can still see it in him, he wants to jump up to greet me, shoulder-to-shoulder, eye-to-eye, so he can lick my face, but his front legs barely leave the ground and he knows it is no use. He remains on the ground. So I bend down, getting to his level for our greeting, eye-to-eye just like always, to show him our embrace still works. But for how long?

On our walk yesterday, for the first time in the four years we’ve lived here, he couldn’t make the loop that has been our daily routine. Barely into it, before we hit the long hill going up, he stopped smelling things, he started panting, his face became focused, and he fell behind. I turned around and we went home. He slept all afternoon. When I let my mind think about losing Pickles, I literally become blind as my eyes fill up with tears at the thought. Even as I write this, I have to wipe them away. And so I am trying to train myself not to. Trying not to think about what once was or what might be, but about what we have today.

We draw our inspiration from wherever it comes. From philosophy. From a poem. A song. Even from a cartoon; from Oogway, the wise, old turtle in Kung Fu Panda. “You are too concerned about what was and what will be,” he tells Po. “There is a saying: yesterday is history, tomorrow is a mystery, but today is a gift. That is why it is called the ‘present.’” And that is how I try to think about my remaining time with Pickles; a gift to cherish every, single day. I sit at my desk and type, and he sits near me on his bed.

Occasionally, we’ll take a break and get some fresh air. At night, it takes him four or five attempts to get on the couch and then we sit together, his head on my lap, watching television. Or I’ll read or play with the kids, with Pickles right there with us. I suppose I am practicing a sort of doggy meditation, trying to stay in the present, relishing every day I have with him. Forcing my mind to stay focused, as I play a game I know I will lose; trying to stave off for as long as possible the finish line in order to protect the heart that knows someday, it will be ripped in half.