Gunny, an 8-year-old pit bull mix is a dog bait survivor. In May 2008, Gunny was found on the side of the road with multiple injures, including a mangled leg. His scars, open wounds and harrowing state of malnutrition indicated he was used as a bait dog in illegal dog fights.

Amy Cranmer, occupational therapist for Charlotte-Mecklenburg School system and volunteer at North Mecklenburg Animal Rescue (NMAR) learned about Gunny when a friend emailed her to tell her about the injured dog on death row.

Even though NMAR was completely packed and had no funds to cover extensive medical procedures they agreed to welcome Gunny, take him to their vet, and at least offer him mercy instead of five agonizing days at the pound before his inevitable death. However, when veterinarians met Gunny they fell in love with him and refused to put him to sleep. They wanted to give him a chance and help him survive.

A lot was needed to get Gunny on the road to recovery. He needed a leg amputation and throat surgery for crush injuries to his neck. Cranmer agreed to foster Gunny while he recovered and during this process discovered Gunny was destined to be part of her pack.

“When they brought the little guy out to me, I thought ‘Oh wow, they put a big, squishy purple wrap on his wound,'” said Cranmer. “But as he hopped closer – with a great deal of agility and a huge ‘smile’ on his face – I saw that there was no cast. That was his leg.”

With the help of the community and other rescue organizations, enough funds were collected to cover Gunny’s medical treatments.

“Gunny received one letter from a fourth grader, with two one-dollar-bills in the envelope,” said Cranmer. “[The fourth grader] apologized that she had already spent the rest of her birthday money, but wanted to help Gunny with what she had left.”

Today Gunny is a dog ambassador for his breed. He participates in local events spreading awareness on the injustices done to dogs – especially pit bulls.

“Gunny and the Magical Pack” is a book Cranmer decided to write after she and Gunny spoke about dog fighting to local children in a Charlotte neighborhood. This event made her realized that people know very little about the cruelty  involved in dog fighting rings. 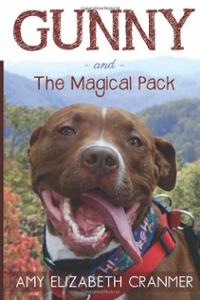 “Some of the kids were like, ‘But that’s what they do in my neighborhood,’ ” said Cranmer. “Literally, when a boy came up to me and said, ‘I didn’t know dogs had feelings,’ that was the start.”

The book has been read in many elementary schools. It inspires children to learn more about what they can do to end dog fighting rings and how they can help abuse and shelter animals.

“After we finished the book and our passionate discussion, students wrote about dog fighting: what it is, why it’s a social issue, and how we as citizens can help,” said Gretchen Schultek, elementary school teacher in Charlotte, North Carolina.

Cranmer and Gunny continuously work educating people on animal abuse and the cruelty of dog fighting rings. Copies of the book have been donated to local schools and libraries in an effort to reach children, who are crucial players for changing animal abuse and neglect happening in our country.

To learn more about Gunny you can read his full story, watch a video, purchase  “Gunny and the Magical Pack,” or follow him on his Facebook page.

Dave's Pet Food Review
Satos are Puerto Rican Street Dogs, and You Can Adopt One
Meloxicam for Your Dog
Cephalexin for Dogs
Iams
Top Dog Foods for Pugs
Dog Food for Brittany Spaniels
What’s the Best Raw Dog Food for Your Pet?