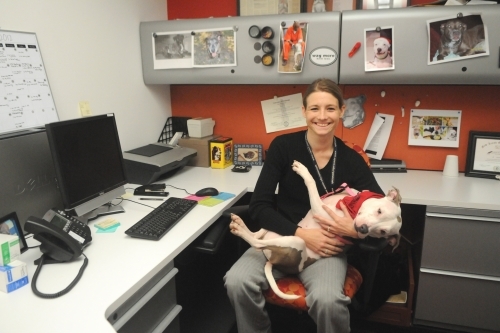 Among the pampered pooches at the National Dog Show this weekend in Philadelphia will be Vivian Peyton. The Staffordshire Terrier mix is attending as one of the Purina Therapy Dog Ambassadors. It’s a long way from her start in life, where she was used as a bait dog for a dog fighting ring.

Vivian was brought to a city shelter in Philadelphia when the non-profit New Leash on Life USA stepped in to give her a second chance. The program takes dogs that aren’t being adopted due to health or behavioral problems and boards them in a prison complex. There inmates work with the dogs to train them and socialize them so that they can be ready for adoption. It also helps the inmates by making the eligible for training and job assistance working with animals after their release from prison. Vivian was a member of Leash on Life USA’s second class.

Vivian was wounded, underweight and apprehensive around people when she first joined the program. After only a few days in the Leash on Life USA program she started to relax. She spent three months in the program, passed her “good citizen test” and was adopted by Michele Pich.

Pich works as a Veterinary Grief Counselor at Penn Vet. Vivian now is a therapy dog through Penn Vet’s VetPets program. Vivian works with grieving pet lovers and with sick children at the Ronald McDonald House.

“I have loved her since the second I met her, and could see that she was destined for greatness,” said Pich. “I feel so fortunate to be her mom and to be with her through this amazing privilege of being part of the Therapy Dog ambassador team.” Pich is not the only one proud of Vivian. “We are incredibly proud of Vivian Peyton for showing the resiliency of animals and what can be accomplished with love and care,” said Marian V. Marchese, the founder of New Leash on Life. “She will always be New Leash on Life’s ambassador dog.”

As a member of the Therapy Dog ambassador team Vivian, along with the other two ambassador dogs Lil’ Abner and Stella, will not only be at the dog show but will make appearances on several television shows, including the Today show.