Poor Lexy here was the victim of a cruel backyard breeder.  She had never received the proper care and love a dog deserves, and spent the entire first eight years of her life never once being allowed outside.

She’s been forced to give birth to countless puppies, and the ordeal clearly has taken its toll on her.  She was malnourished, sickly, deathly afraid of people, and it wasn’t even clear at first if she would make it.

Once rescued, she was brought to the British Columbia SPCA, where she waited for what seemed like an eternity.  She waited for months for someone to come along and adopt her.  In fact, there was only ever one person that expressed any interest in adopting Lexy at all. 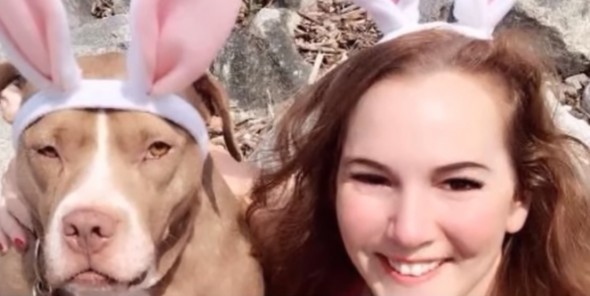 That person is Jenny Mackay, and she is Lexy’s new mom.  Mackay brought Lexy home, and things were starting to look up for Lexy for the first time in her life.  She wasn’t completely out of the woods, considering what someone had done to her.  However, she knew this, and had the patience to care for Lexy like no one else ever had.

At first, Lexy was very quiet and shy.  She was full of anxiety, and given her past it’s totally understandable.  After all that abuse, could Lexy learn to trust another human every again?  Only time would tell.  But one thing was clear; Lexy was willing to try.

It took some time, but what you see as Lexy today is 100 percent a different dog.  She loveable, playful, full of energy and spunk, and Mackay knows that she made the right decision when it came to adopting her.  Lexy never gave up on herself, and with Mackay’s kindness and patience, she’s an amazing dog now!