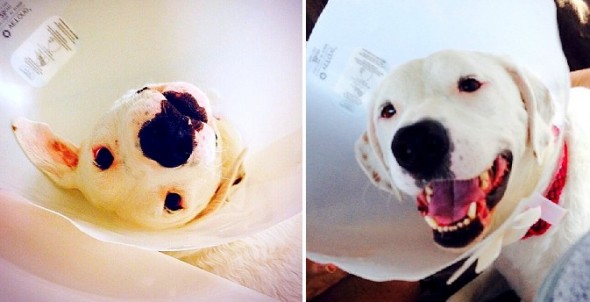 This comes from Chloe’s GoFundMe page:

Chloe Grace was born April 13, 2012 at a puppy mill. In July, we happened to stop by the Keller’s Flea Market in Savannah, GA to look around for motorcycle equipment. We stopped by the dogs to look, and as we were leaving, my husband stopped me and said we need to get that dog. He said, I don’t know why, but I feel as if God is calling me to adopt the dog. (Mind you, we were living in a place that didn’t allow dogs.) So we bought Chloe and took her to the vet the following Monday… of course, she was loaded with worms.

After 2 days of having her, I noticed not even the loudest sound woke her.  So we took her back to the vet, where it was confirmed that our baby girl was DEAF! Imagine our surprise. We were told by the vet that it’s very common for white dogs to be deaf.  Not really knowing really how to train a deaf dog, we reached out to the awesome folks at PetSmart in Brunswick Ga. There we (both us and Chloe) received the training needed for her visual commands. (Doggie sign language.)

Although we have 3 other dogs, (2 rescued from being euthanized) and after having raised many, many dogs throughout our childhood, we are telling you she is the BEST dog we have ever owned.

As we mentioned above we have 3 other dogs plus 1 cat, and it is these members of our family that have given her plenty of reasons to run and play hard. She is now 3 years old and LOVES to run, swim, and chase bugs. Maybe she loves doing this a little TOO much, as she tore her left ACL in her back leg about 6 months ago.  We talked to the vet and were told to limit activity for a few months, give her medicines and see if that would help heal and/or reconnect the muscles. As we were desperately trying to avoid surgery, she must have felt somewhat better and healed some as she decided to run once again when we let her out one night to go do her nightly business. 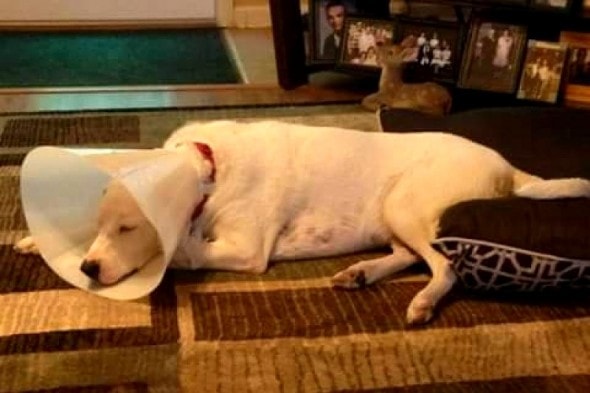 Unfortunately, she ended up tearing the ACL in her right back leg. Realizing the extent of damage, we had no choice, but to take her to the ortho vet in Richmond Hill.  Cedar Animal Hospital took her in, evaluated her and has been wonderful to both Chloe and us.  They prescribed two months of prednisone/tramadol to build up her fat and muscle, and VERY LIMITED movement.

Chloe had her first surgery on 8-13-15 on the right leg, because it was most damaged of the two. Before the procedure, one could hear a “popping” sound, as she walked, due to the bones colliding in her knee. Doc Heather feels the surgery was a success, so as long as she stays on “extreme” limited activity. After 10 days, and the stitches will be removed, and she will be able to swim as a form of exercise. We are in day 4 of post operation and she seems to be doing well. She’s not walking on the right leg yet as it is still swollen and I am sure still very tender. We have a long road of recovery ahead of us.

We have already paid for the first surgery, but she will still need her left leg operated on in 8 weeks.  We would like to raise another $1500 for this to happen.  We are asking for your prayers for Chloe to have a full recovery. And if it has been laid on your heart or you can help in any way monetarily, we would greatly appreciate it.  She is our baby, handicapped or not….she stole our heart from day one!  God has our back on this and we know he is in control.