This submission comes from The Animal Rescue Site, which, in addition to featuring many lovely rescue stories, sells tons of stuff – from shirts and shoes to office and pet supplies – and with each purchase, food is donated to shelter pets in need. 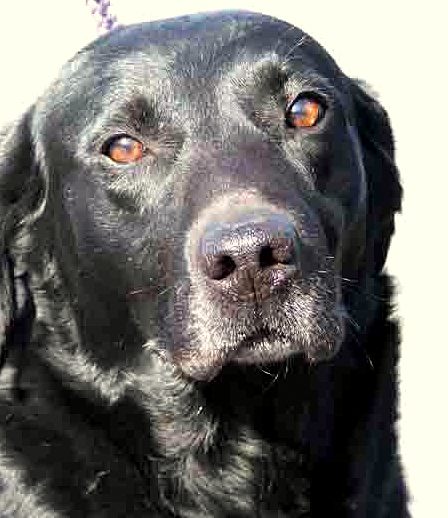 Four years ago we adopted a stray, black male Labrador about 5/6 years old. He’d been mistreated by his previous owners and was incredibly timid, missing most of his front teeth and had a cauliflower ear. He was also extremely nervous around men.

On his first walk with us something spooked him and he managed to slip free and run. We spent two agonising weeks searching every possible place he could be hiding. Eventually the call came in about a dog that had been living by the side of a busy dual-carriageway and a few days later he was returned to us.

Since then I have witnessed and shared in one of the most amazing relationships and bonds between dog and human. It was my mum that signed the adoption papers, but he adopted her as much as she did him. The two of them became inseparable. He became her little shadow, following her from room to room, travelling with her in the car wherever possible, or sitting patiently by the door every time she had to leave him behind.

We called him Dodger after the Artful Dodger when we discovered he had a cheeky knack for stealing loaves of bread. Over the four years he regained his trust in people, although has always stayed a little wary of men, brought us lots of laughter, been a reassuring presence though the bad times, but his love, particularly for my mum only grew. They seemed to understand each other in a way I’ve not witnessed before and his devotion and loyalty to her never wavered.

Yesterday was the hardest day in which we had to say goodbye. He had been so brave and fought to stay with us for so long. We held his head and cuddled him, and told him how much we loved him. I watched my mum’s heart break as she had to say goodbye to her best friend. Never have I seen a dog more deserving, grateful and appreciative of a loving forever home, we’re just so sorry it couldn’t have been for longer.