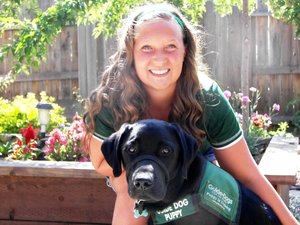 Guide dogs are amazing animals that do so much good for people in need. Just as amazing are the people who commit the time and effort to training these dogs. It’s a big responsibility, but one 14-year-old in California has taken it on and is impressing those around her.

Annika Jasek-Rysdahl has always been interested in the idea of helping people through animals. For a long time she has wanted to work with training guide dogs, but she had to first convince her parents.

“I had been wanting to do it for a long time and then my parents finally let me in October,” said Annika.

Once she had her parents support she started her journey as a trainer by attending meetings. For three months she had to attend meetings, after which she began to puppy-sit, and then finally she received a home inspection to make sure her home was a good fit for training. There was one final step Annika needed though; being only 14-years-old she needed permission from Pitman High School to bring her new puppy, Chevelle, with her to school.

Luckily, every one of her teachers and the school principal were behind the idea. The reaction from her classmates upon seeing a dog in school was initially confusion.

“I could hear people say, ‘What’s a dog doing here?’ said Annika. “Some people even asked if I was blind.”

However soon her black lab in training, Chevelle, became part of the school community and the teachers and students at Pitman High School look forward to seeing him. His presence brings a lot of smiles to the students and staff.

“Of course, he doesn’t mind the attention. All of my friends love him and always ask where he is when I don’t take him to school with me,” said Annika. “Even my teachers look forward to seeing his face and wagging tail walk into class.

In addition to Chevelle’s positive impact on campus, many of the students are also impressed with Annika’s commitment to raising a guide dog.

“It takes a lot of maturity and compassion to do what Annika’s doing,” said senior Deborah Haynam. “A lot of people her age wouldn’t spend their time training a guide dog, but she is.”