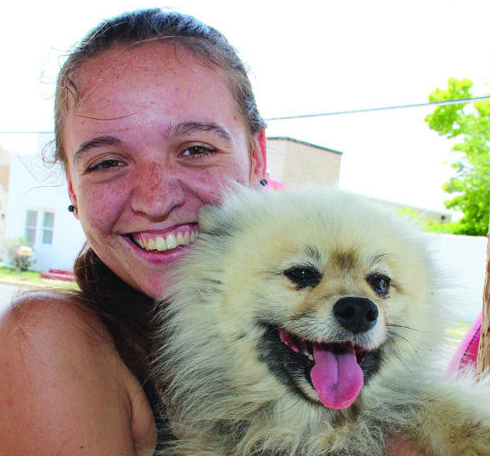 Three months ago Jasmin Buckley’s dog Smokey disappeared. She did all she could to search for him but as more time passed she began to wonder if she’d ever see Smokey again. Then last Friday she got the phone call she had been waiting for, Smokey had been found. Somehow he had ended up 40 miles from him home.

When Smokey went missing Buckley put up flyers, ran ads in newspapers and posted on Facebook hoping Smokey would be found. As month after month passed though Buckley wasn’t sure she’d ever see him again.

“One of the thoughts that came across was maybe he’s gone to a better place, that he passed away,” said Buckley.

Then a call came from Coyanosa, Texas, a town 40 miles away from Buckley’s home. Someone had seen one of the Facebook posts about Smokey and immediately knew they had him. They called Buckley and her mom to let them know Smokey was alive. As soon as Buckley heard the news she was on her way to be reunited with Smokey.

Buckley made the 40 mile drive to Coyanosa and was thrilled to be finally reunited with her lost dog.

“I’m so happy,” said Buckley. “The second I saw that face, that smile, I knew it was him. He recognized me immediately, he was so happy.”