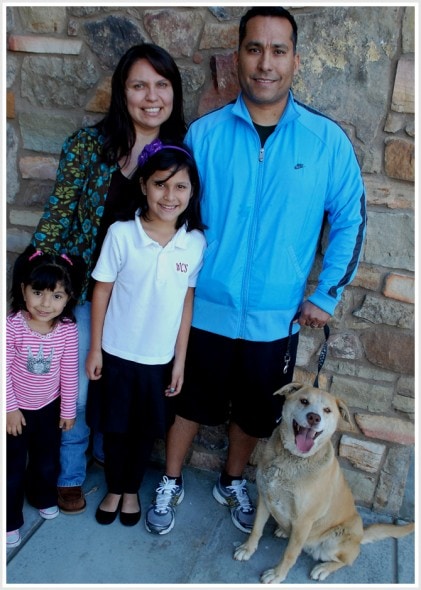 Riverside County Animal services reunited a dog missing for two years with her grateful family this week, at a shelter 50 miles from her home. As the reunion video shows, Foxy is a true Daddy’s girl.

Christina Martinez wrote at Facebook, saying “We gave up hope on microchipping but now, after 2 years, we are so glad we did it! How she got from Montebello to Riverside remains a mystery but at this point we are so glad to have her back!”

Officer Barron scanned the dog and discovered an AVID microchip. A phone number was provided and Riverside County Animal Services called the number and made contact with the very-surprised Martinez family.
Larry and Christina Martinez and their two daughters, Lauren, 8, and Jasmine, 3, rushed out to the Western Riverside County/City Animal Shelter in Jurupa Valley  on Tuesday to find out if, indeed, Foxy was finally found.

When Foxy, now about 5 years old, went missing, the family posted pictures throughout their neighborhood and visited local shelters. Christina Martinez said she was so excited about the news that she allowed her oldest daughter to leave school earlier than normal today.

Within moments of reaching Foxy’s kennel run to make a positive identification, Christina Martinez said she knew immediately that it was her long-lost pet.

“Yes! That’s her!” Mrs. Martinez said. Foxy did a little dance, wagged her tale and raised her chin, awaiting the scratches Mrs. Martinez and her family used to give Foxy on her chin and chest area. “Oh, we missed you! Lauren is waiting for you!”

Later, when an animal care technician walked Foxy out to the rest of the Martinez clan, Foxy sat at Mr. Martinez’s feet, then raised her front paws and wrapped them around his right wrist in what looked like a handshake and embrace.

“She missed you!” Mrs. Martinez said. “Look, she’s hugging you.”