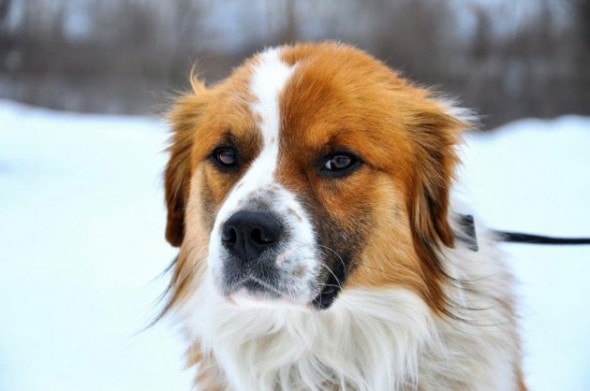 Life is beginning anew for Orville, a floppy eared Australian shepherd who was shot in the head and left for dead 2 weeks ago in Quebec.  When a passerby first spotted the cute 2 year old dog in a ditch at the side of the road, they presumed he was already dead but then realized he was hanging on.   He was brought to an animal shelter where even though they thought he might be brain dead they couldn’t bear to put him down without giving him a chance.

It’s a good thing they did, because after 2 days of laying still and not really eating, he finally started to move and show some improvement.  Now, 2 weeks later he is almost back to normal.  “It’s a miracle,” says Carl Girard from the shelter where he is recovering near Cowansville, Que., about an hour southeast of Montreal.  The dog, who has been named Orville, was shot with a .22-calibre weapon, probably with the intent to kill him.

He shows signs of having been abused, cowering when he sees a stick or broom, and refusing to eat from a human hand.  He also appears to have been kept outside as he showed no sign of house training.  He was also full of worms and had a thick winter coat.  The shattered bullet is still in his head, too difficult to remove so he will have to live with it.  “It (the bullet) kind of exploded in the brain so it would be difficult to take it out,” Girard said.

Orville got his name from Girard’s love of the popcorn with the same name.  “We wanted to find a name that wasn’t going to (label) him as a victim,” Girard said, “so we chose Orville.”

Girard has filed a complaint with provincial police and he hopes the online attention Orville has received might generate some leads into the animal cruelty investigation police have begun.  For now Orville is spending his days in Girard’s office, learning how to be a pet.  “He runs, he plays, just like any other dog,” Girard said.  “To see how he is today is just wonderful.”  He owes his life to Girard and the shelter staff who refused to give up on him, and hopefully will go on to live a long and happy life.