Sadly, Frida the rescue dog has had a lot of work to do lately.

In her long career, this Labrador retriever has found 52 people, 12 of whom were in life-threatening situations following the 8.1 magnitude quake in Oaxaca and were rescued because of her.

Now, with people trapped amid the debris of the recent quake in Mexico City, Frida is trying to stem the death toll alongside her fellow rescue workers. Thus far, at least 245 people have lost their lives and those injured number in the thousands.

Frida works with the Mexican Navy’s Canine Unit and she’s such a good dog, even the President of Mexico has recognized her service via Twitter. 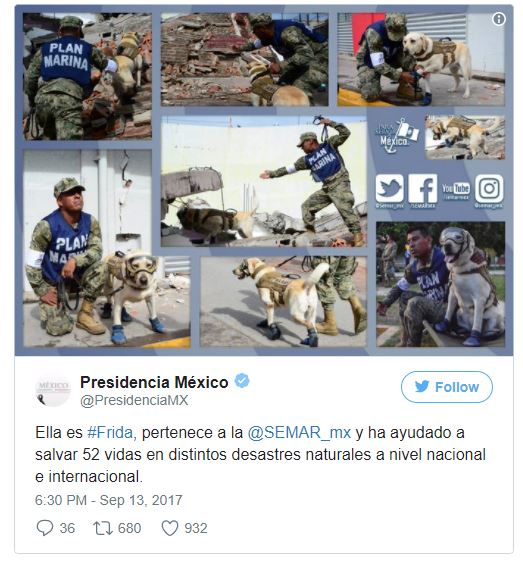 “This is Frida,” he wrote. “She belongs to SEMAR and has helped save 52 lives in various natural disasters at national and international levels.”

People have been snapping pics of Frida in her safety gear, thanking her for her service and spreading the word about her hard work. Buzzfeed recently posted a piece about Frida, calling her, “the coolest dog in Mexico and possibly the whole world.”

With 12 lifesaving rescues to her credit, we wouldn’t dare disagree. <3