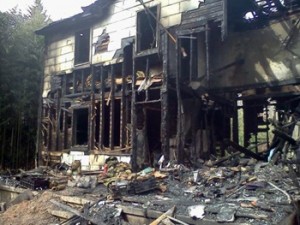 A series of articles from BelAir Patch caught our attention recently for perfectly illustrating the devotion of one dog and the man he saved from certain death.

Of course, it’s not uncommon to find weekly examples of dogs barking to alert families of dangers like house fires, but most of them do not have to lay down their lives in the process. Sadly, some do, as did Shamus, who should be remembered for his last and most courageous gesture of love.

Unfortunately, despite his sacrifice, his master has now crossed the bridge to join him, and considering the comments of those who knew Andrew T. Schmidt, it would not surprise us if this was broken heart syndrome. While that may never be known, even if it’s just a matter of chance, we’ll remember this dog for his bravery, and take comfort in knowing that two best friends have been reunited.

A 79-year-old Street man narrowly escaped a Sunday night fire that destroyed his lifelong home after he was awakened by the barking of his constant companion—a dog named Shamus.

Shamus, however, did not escape the fire at a house in the 1200 block of Boyd Road. The 5-year-old black mutt died after his barks alerted Andrew T. Schmidt to the flames just minutes before escape would have been impossible for the homeowner.

Schmidt, who has lived in the house since he was born, is in critical condition at Johns Hopkins Bayview Hospital.

“Oh my gosh. It was like [Shamus] was like his child,” said Janine Bruce, a friend of Schmidt. “They were like two peas in a pod so the dog probably did save him.”

According to the state fire marshal, Schmidt narrowly escaped the blaze before walking 500 yards barefoot to his neighbor’s house to call 911.

A spokesman for the Harford County Fire and EMS Association could not disclose information on the nature of Schmidt’s injuries. About 75 firefighters from nine companies, including Bel Air, responded to the blaze, which caused about $200,000 in damages.

Bruce, who met Schmidt at the Bel Air Farmers’ Market, said her friend had diabetes and heart problems.

“He had a really bad heart, if he walked 500 yards he’s probably in shock,” Bruce said. “He’s been [selling] at the Bel Air Farmers’ Market for as long as I can remember.”

Bruce does not believe Schmidt has any family, adding that he never got married or had children. She said he has lived in the Boyd Road house since he was born.

“He kind of adopted a bunch of us at the Farmers’ Market and he calls us his godchildren,” Bruce said. “He’s really a great old guy.”

The Street man whose dog perished after saving him from a March 6 house fire died Saturday due to complications from the incident.

A family friend said Andrew “Andy” T. Schmidt, 80, passed away Saturday night about seven weeks after he suffered burns to his right hand and smoke inhalation. He also suffered from diabetes and heart problems prior to the blaze.

Shamus, Schmidt’s 5-year-old dog, died in the fire after alerting his sleeping owner. Schmidt, who lived in the 1200 block of Boyd Road his entire life, then walked about 500 yards to a neighbor’s house to call 911.

Schmidt’s funeral is scheduled for 11 a.m. Wednesday at St. Mary’s of the Assumption Church in Pylesville.

About 75 firefighters from nine companies responded to the March blaze, which caused about $200,000 in damages.

Sincere thanks to Patch editor Brad Gerick for granting Life With Dogs permission to republish content.

5 thoughts on “Friends to the End”