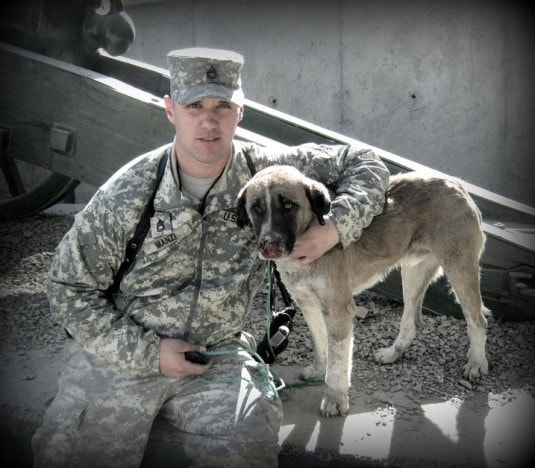 Thanks to the the help of a U.S. Army sergeant, an Afghan dog has been given a chance at a new life in America.

1st Class Jim Manzi met and befriended the dog while on duty in Afghanistan. “He is a really great dog,” said Manzi, while home on a two-week break from a year-long tour in Afghanistan.

“I always thought I wanted to bring him back,” Manzi said. “We named him Sgt. Sneezy because it’s really dusty in Afghanistan and he was always sneezing.”

Thanks to the assistance of a friend, Jennifer Muhe, that wish has become a reality. “She is my No. 1 supporter,” Manzi said of Muhe. “She was the driving force in getting everything together. I owe her a lot of gratitude.”

Muhe is the owner of a local pet care business called No Place Like Home. She set up a website to raise money for Sgt. Sneezy’s airfare to the U.S. Within just a few days, Muhe and Manzi received $3,000 worth of donations for the plane ticket.

Sgt. Sneezy arrived in the United States about 10 days ago. He will be treated at a Maine animal hospital until he is healthy enough to be transferred to another facility in Pennsylvania. Manzi completes his tour in Afghanistan at the end of June, and Sgt. Sneezy will join him for his next assignment at Fort Story in Virginia Beach, Va.

6 thoughts on “From Afghanistan with Love”