When Hemi arrived at Hearts United for Animals, she was broken hearted-literally! The lab/poodle mix was brought by a family who realized that she would grow too large for their landlord to accept in their apartment. So, she arrived, not understanding why she was losing a family she had grown to love but now were leaving her. 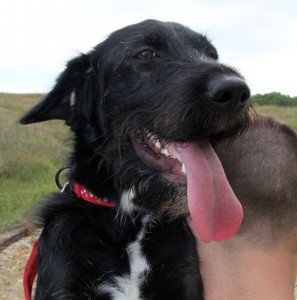 As staff at Hearts United for Animals observed Hemi, they quickly realized that something was not right. She was very lethargic for a puppy and they could feel the blood coursing through her heart valve, under her arm. They knew something was drastically wrong and Hemi needed help.

She was immediately brought to Omaha to be evaluated, where she was diagnosed with Patent Ductus Arteriosus, an opening between two major blood vessels leading from the heart that did not close after birth. This was the worst case that they had seen and, to make things worse, over 50% of dogs with this condition die from heart failure within a year of life.

Thankfully, Mobile Animal Clinic, in Omaha, recently upgraded their equipment and facilities to be able to accommodate major surgeries which previously would have been referred to Kansas State or Iowa State. The operation is extremely delicate with high chances of something going wrong.

However, Hemi pulled through the surgery better than the surgeons had even expected. After her surgery, Hemi walked into the Animal Emergency Clinic on her own for overnight observation. It was like she was showing everyone that she would not be defeated. She spent another week being monitored during which she was apparently ready to go. She was suddenly finding the energy she never had, leaping around and showering the staff with kisses!

Though Hemi did not appreciate the long recovery advised by the surgeons, it paid off and she is now fully recovered. She loves to take walks with people, play with tennis balls and is as good as new. She should have no lasting effects from the operation and is now living happily with her new forever family.

Hemi is a true example of how a physical ailment need not prevent a pet from becoming a loving new addition to a family. Hemi’s heart was broken but she is now whole, both physically and emotionally!

Hearts United for Animals is a 501(c)3 non-profit organization dedicated to the relief of suffering. They are a no-kill shelter, sanctuary and animal welfare organization. The dogs at Hearts United for Animals share large yards where they are able to play freely in the 65 acre farm of trees and grass. Two of their specialties are emergency medical assistance and puppy mill recoveries.