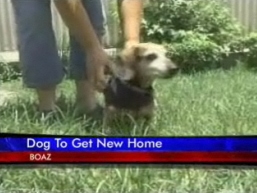 BOAZ, AL – There’s good news concerning a dog that was found in a trash can. Authorities rescued the animal last week at a gas station in Albertville. The outpouring of support for the animal has been tremendous, and shelter officials expect this dachshund to be picked up Saturday.

The dog is now at the Second Chance Animal Shelter and has been since its rescue last Friday. Albertville police say their chief was actually the one who discovered the dog. It was found in a trash can at the car wash of the Chevron station which is located at the intersection of Rose Road and Highway 431.

It was initially taken to the vet to be checked out. “The vet gave the dog a once over. Didn’t seem to find any major health issues. I think, other than I think she said the dogs teeth need cleaning,” said Sgt. Jamie Smith of the Albertville Police Department.

Shelter manager Wanda McGee says a woman from Marshall County will be getting the dog this weekend.

14 thoughts on “From Trash to Treasure”