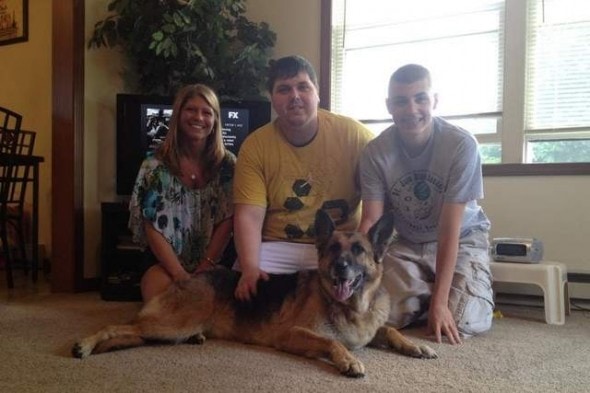 The Sinnett-Dekrell family lost a family member five years ago on Christmas Day when the wind blew a door open, and Angel, their German shepherd, bypassed the electric fence and wandered away.

They had figured they did everything they could have to find Angel.  Roaming the streets looking, passing out many flyers and hanging posters, contacting everyone they know on Facebook, and a reward was even offered, but nothing.

“No one answered any of our flyers,” said mother Maggie Sinnett.  “You go looking everywhere, but you don’t know where to look.  You feel lost.  You feel hopeless.”

A year passed by with still no sign of Angel anywhere.  Two years turned into four faster than they could count, and still, no one had seen Angel anywhere.

Now, nearly four and a half years to the day, she got a phone call from Richland County Dog Warden Dave Jordan (Monday), and was given some unexpected news.

A microchip implanted in Angel at the time of adoption is what finally got her home.

The family went out to pick Angel up on Wednesday, and she was in great condition.  Angel had a collar on, which the family took to mean someone had been taking care of her while she had been missing these past years.

Maggie did admit to being a little upset someone had kept her dog for so many years, but also said she was grateful that she was OK, and seemingly well taken care of.

“She was like my child,” Maggie said.  “She was obviously very well loved and we are very thankful for that.”

Angel was adopted as a present for then 7-year-old Andrew Dekrell, their son.  Andrew ended up being the last person to know about Angel being found.  His birthday was Wednesday, and the family figured what would be a better birthday present.