Some dogs will easily take medicine in cheese or peanut butter.  Others are so clever, they won’t even touch steak that might have such evil lurking within.  But this dad has tried something that will have the rest of us saying, “Now why didn’t I think of that??”

Fellipe Vilaca Chibante opted to use reverse psychology on his dog Mel.  This tactic obviously won’t work on every dog, especially if their medicine is a bitter pill.  But it just might work on an extreme beggar, which many Dachshunds certainly are.

This dog dad knows his girl is the worst kind of beggar, and the more he tells her no, the more she begs.  This is definitely going to elicit a lot of comments like, “But what about when you really mean no?  Then she won’t listen!” 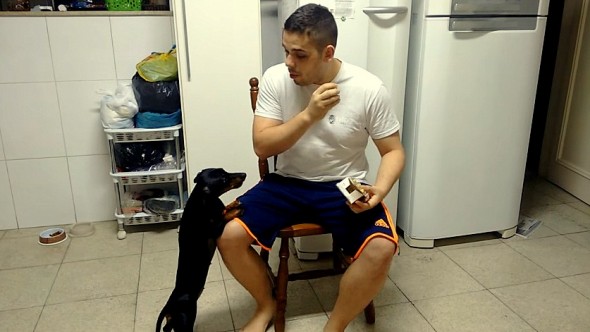 Okay, so this might not be the best idea if you want a perfectly well-trained dog, but sometimes you have to do what’s necessary to make sure they’re healthy.

My mom always had to give in to my whiny behavior and crush up Children’s Chewable Tylenol and put them in ice cream to get me to take them when I was sick, but that was the only time she ever kowtowed to a tantrum.  Sometimes you have to just baby people a little when they’re not feeling well.  Dogs, too.

Chibante’s got the right idea though, and pretends that Mel’s not allowed to have the delicious treat he’s stingily withholding from her.  Then he “accidentally” drops it on the floor, and “oh no… you got it… whoopsie.”