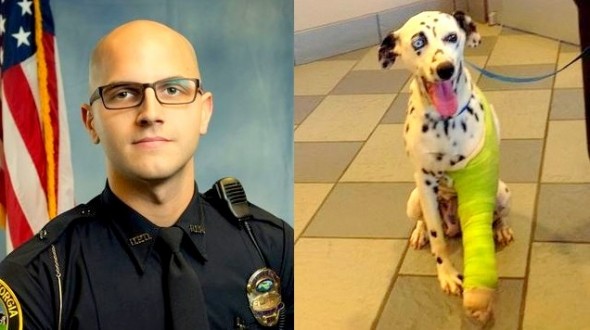 A Dalmatian who was left badly injured after a hit-and-run accident was rescued by police officer John Guerrieri, who took her to a veterinarian, and helped find her a home.  A rescue group whose mascot died recently is glad to be taking her in as their new goodwill ambassador.

Guerrieri received a call about an injured dog on June 30th.  What he found was a Dalmatian with a broken leg, but a big smile and a wagging tail.

“She didn’t look like a stray. She looked like she was fed on a regular basis,” he said.

He tried to find her owner, but when none was found, Guerreri took her home and called her Victoria.  Then he drove her to a vet and paid $400 to have her leg put in a splint.

“I just knew we had to give her a chance to survive and the only way to do that was to find out the extent of her injuries.” Guerrieri said. “Seeing how happy she was, I couldn’t see her being put down.”

The damage was worse than expected, so he and the vet concluded that Victoria’s leg would need to be amputated.  But it would cost over $2,000. 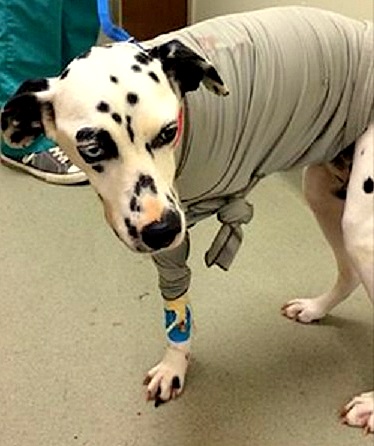 Family members of other Dalton police officers banded together to raise the money, and came across the Dalmatian Rescue of South Florida.  They agreed to take her in and pay to have the leg amputated.  Strangely enough, their mascot had cancer in its leg and died a few months ago.

Some might wonder why the officer didn’t keep Victoria, but his family feels they wouldn’t be able to give her the best home, and it is important that she go to where she’ll be happiest.

“We would love that, but me and my wife have three children and a dog and a cat,”Guerrieri explained.  “It really wouldn’t work for us. But knowing where she’s going and what her role is, we thought that’d be the best thing for her.”

His family will pick her up from the vet tomorrow, and soon she’ll be on her way to her new home in Georgia.

Guerrieri says he never expected to receive so much attention from his heroic actions – he just understands the importance of having good character and following his gut.

“Somebody told me, ‘Character is who you are when nobody’s looking,’” he said. “I just knew that in my gut, that if I let this dog be put down for a broken leg, I would feel guilty.  I didn’t want my children to know their dad had an opportunity to save a dog and didn’t.”

Dalmatian Rescue is fundraising for her expensive medical care.  If you would like to help Victoria by making a donation, please click here.