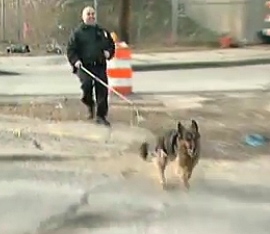 The first available tape of this runaway dog was terrifying to watch – news that the pooch had escaped unscathed had not yet been reported when it was released. The PennDOT footage was not part of a news report, and simply showed one near miss after another as this lost German Shepherd wound through lanes of I-95 traffic in Philadelphia.

Captured by police and turned over to the city’s animal control shelter, the stray was given a clean bill of health after a medical exam. “The early word is that she appears she will be all right medically,” said Wendy Marano, spokeswoman for the Pennsylvania Society for the Prevention of Cruelty to Animals. “She is an older animal, and she looks like she’s been fending for herself on the streets for a while, so she’s a little skittish.”

Adoption applications are already coming in, but it will be a few days before she is available. Shelter employees have affectionately nicknamed the wandering survivor Northbound.