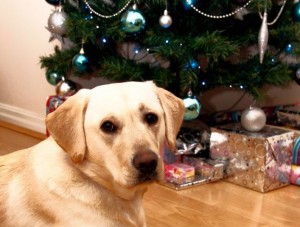 A shocking incident of dog abuse captured on CCTV has produced a very happy ending for Poppy, the Labrador Retriever puppy seen in the gut-wrenching video below. The faint of heart would be well served to skip the video: instead see comments here and you’ll understand just how horrified those of us who saw it were at the time. Given the abuses she endured at the hands of her previous owner, the news that she’s moved into a loving home could not be more welcome.

Poppy is now looking forward to a new life with  Mark Thomas, 30, and his fiancee Stacey Gartland, 23. The Lacanshire couple have renamed their new family member Hollie, and they make no bones about their intentions for her. Thomas said, “We are definitely going to spoil her. She has been out in the snow and absolutely loves it. I don’t understand how anyone could treat a dog like Hollie was. But she seems to be loving her new home and is a really happy dog. We are both delighted.”

Hollie was nursed back to health by RSPCA staff after the beating administered by her previous owner. Tunisian Mohammed Abou-Sabaa, 21, admitted to a brutal attack on five month old yellow labrador Poppy because he was “having a bad day”,  according to court testimony. He landed more than 20 blows on the dog before kicking Poppy down a flight of stairs outside his flat. CCTV cameras also filmed him standing with his full weight on her neck. Abou-Sabaa was given a six-week sentence (suspended for two years), ordered to do 250 hours community service, and banned from owning an animal for four years.

Considering where she’s come from, the future could not look brighter for Hollie. According to Thomas, she seems to appreciate it: “She just loves all the attention and things are going really well.”