A new rescue called Missouri GSD is stepping to help out a dog called Caesar, whom was brought into the Blue Pearl Emergency Clinic nearly frozen to death.  At first, the person bringing him in tried to say the dog was a stray, then changed his story to the dog being his and having been missing.  When that was discovered to be false, the real truth was revealed, and Caesar was taken away.

The poor dog was comatose when brought into the emergency room.  He was starving, and in about the worst shape anyone at the animal hospital has seen in a while.  He has no teeth which is possibly due to him chewing on his chain, and his nails were so overgrown that they were curling under and extremely sensitive. 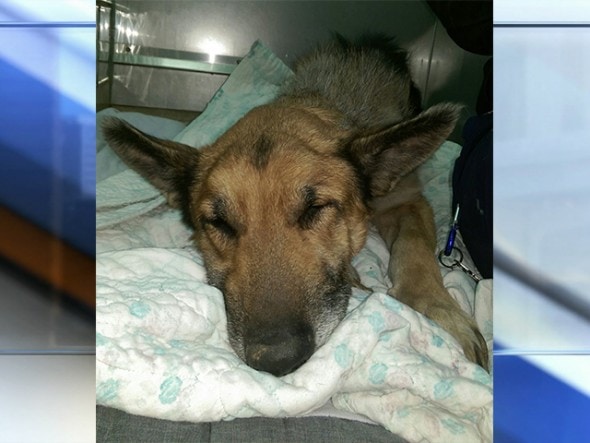 After pressing the man that brought him in further, he actually revealed that the dog was his, and has NEVER been in doors.  He’s been kept outside on a chain, even in the below zero temperatures seen there recently.

Nancy Campbell of Missouri GSD said, “One of his eyes is sunken, so he’s had an eye disease of some type for a very long time. He is heartworm positive.  He has a bad back right leg and he cannot stand on it, it’s extremely painful to the touch, and he is starved, so that doesn’t happen in just a few days.”

Medical staff believe that even though it is going to take quite a while, and require a ton of love and hard work, but a full recovery is possible for Caesar.  He’s going to need a lot of dental work, eye surgery and leg surgery, but he should pull through.  Hopefully, he will one day be available for adoption.