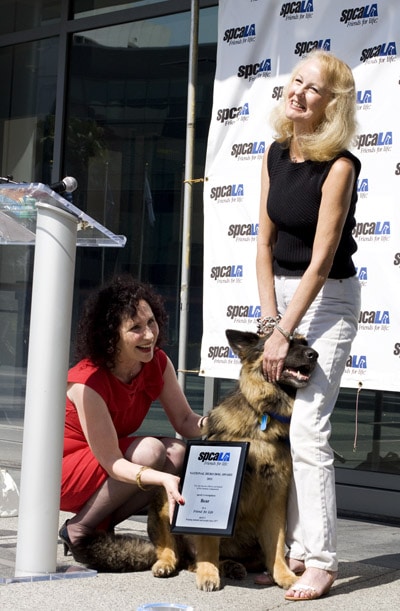 The Society for the Prevention of Cruelty to Animals Los Angeles has presented its 30th Annual National Hero Dog Award to Bear, a 5 year-old Shiloh German Shepherd from Milsap, Texas.  The ceremony was held this morning at Nokia Plaza in downtown Los Angeles.

Debbie Zeisler has suffered from seizures since a riding accident 18 years ago.  Her adopted dog Bear, with no formal training, has learned to detect when a seizure is coming.  In May of 2011, Bear tried to stop her from going outside, but she pushed past him.  Almost immediately, she was hit with a seizure, fell down the front steps of her home and hit her head.  She was out cold.

Bear ran from house to house, scratching on the front doors, trying to find help.  Bear was about a block away from home when, as luck would have it, an animal control officer from Parker County spotted him.  With Bear’s help, the officer found Debbie lying in the hot sun, disoriented and confused.  Paramedics were called and Bear rode with Debbie in the ambulance to the hospital.

Bear, who was adopted from a shelter, has no formal training as a service dog.  He naturally developed the ability to sense an oncoming seizure.  He directs Debbie to take her medication every morning and on occasion, has fetched it for her.

“This just goes to show how amazing shelter dogs can be,” said spcaLA President, Madeline Bernstein, “If Debbie had not adopted Bear, where would she and Bear be today?  The bond between an animal and his human companion is powerful and life-saving.”