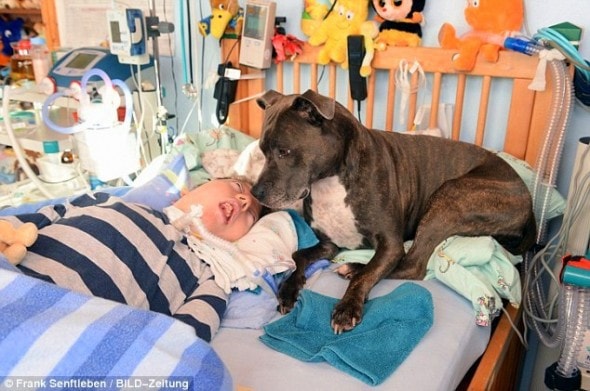 Outrage is spreading across Germany after the government recently made the decision to enforce breed specific legislation against a Staffordshire terrier named Tascha, who has been a comatose boy’s chief ‘carer’ for the last six years.  Now there are petitions asking for their town’s mayor to let Tascha stay.

The Gerzmehle family’s son Dylan was born in a vegetative state ten years ago, but since Tascha came into his life six years ago, his condition has improved. Every morning she comes into Dylan’s room and gently pulls back his blanket with her teeth. She licks his feet, and then curls up next to his face where she can protect him all day.

Machines that monitor his respiration and heart rate show how both improve when she is next to him. But because of a minor skirmish with another dog, the Gerzmehles are being forced to ship her off or have her surrendered to be destroyed.

Parents Barbara and Eckhard moved from Berlin to the small town of Schonwalde in the state of Brandenburg so Dylan could have more tranquil surroundings. Brandenburg has a dangerous dog breed law that does not allow Staffies. Because Tascha is licensed, spayed, had passed temperament tests and was trained by certified dog trainers, the state looked the other way on her presence.

Recently she was involved in a fight that caused minor damage to a neighbor’s dog. The Erna Graff Animal Welfare Foundation said Tascha wasn’t even the one who started the fight. The Gerzmehles apologized and paid for the other dog’s treatment, anyway. 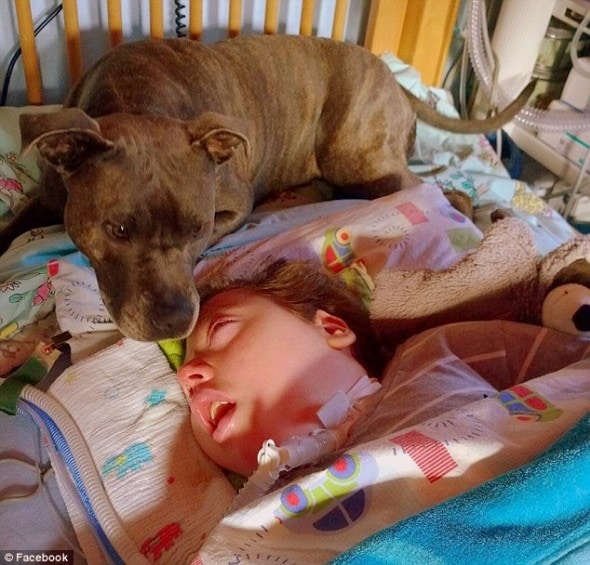 Because of the incident, the state has now demanded that Tascha leave the area or be executed. The EGAWF is on the family’s side, and stated:

“If necessary, we will bring this matter before the Federal Constitutional Court – the highest in Germany.”

Dylan’s doctor has also shown his support for Tascha, saying that she is a therapy dog to the boy, and “strongly advises” against their being separated.

“We could really use the support of the authorities. We must keep Tascha for Dylan’s sake, for every little spark of happiness that she brings to him,” Eckhard said. “Whenever the dog is with him, our son responds. He is happy. His breathing becomes quieter, his heart rate falls. That could only be because of this dog.”

But town mayor Bodo Oehme says there is nothing he can do.

“My hands are tied. The case is clear: the dog bit another. What happens if he was to bite a person, or the child himself?”

But the Gerzmehles will have a meeting with the mayor and other officials next week after a nationwide protests. The mayor’s office now says if it can be proven that Tascha is a therapy dog, they will”try to find a solution to this problem.”

“They have already been around several times trying to take her away to kill her,” Eckhard said. “I will believe it when I see it. But it is a hopeful sign.”

There are two petitions that have been started for Tascha, as well as a Facebook page. They are in German, but can be roughly translated using Google, Babylon or another translation site.

The first petition has the option to sign at the bottom of the page. It asks for (in order) first name, last name, state, country and email address, and asks if it is ok for your signature to be publicly shown. There is an English translation of the petition letter.

The second petition, asking for the mayor to pardon Tascha, is roughly translated as follows:

“We demand that a seriously ill 10-year-old boy not have taken from him the only thing he has. Let Dylan have his Tascha, please!

We call the non-seizure of female Tascha. How can you be so heartless to a child in a vegetative state and take his only comfort? Until recently, the Office had not objected to the properly reported and trained dog. You want a child that has nothing at all to have his beloved dog taken away because he has unfortunately bitten another dog? Even the doctor strongly advises against it taking away a seriously ill child’s therapy dog. Dylan’s parents are convinced he misses her. They are desperate because no one could calm their youngest son, and his dog, his friend, is so caring. We appeal to your compassion. You’re all mothers and fathers! Would you want taken the only thing your child has? We’re not talking about a felon here, we’re talking about a seriously ill 10-year-old boy who is in a coma! Please bring Tascha back! Germany says ‘no’ to animal killings.”

The form at the side asks for your first name, last name, email address, address, state (or country – click the question asking if you’re outside of the USA next to it if you live outside of the USA), zip code and an optional comment as to why you’re signing. Click the checked box to uncheck if you do not want to subscribe to Change.org emails. 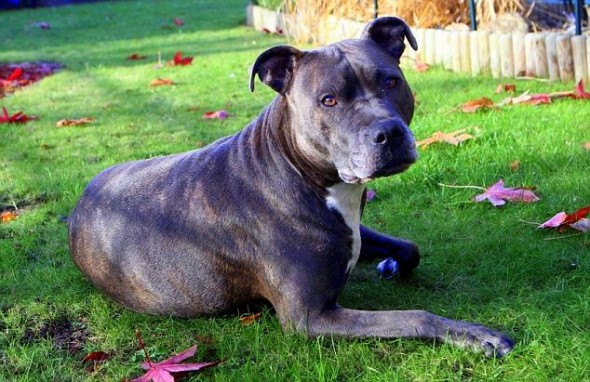