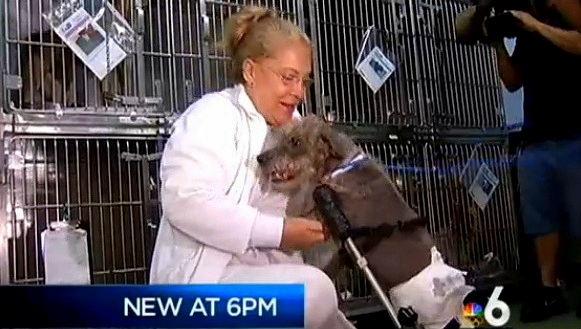 A special needs schnauzer that went missing in Miami was found and brought to animal services just in time to be reunited with his owner for the holiday, thanks to a relative in Cuba and a good Samaritan.

Mireya Fernandez was on vacation when her dog, Puppy, went missing. He had been staying with one of Mireya’s relatives, and despite using a cart for his paralyzed back legs, snuck out through a hole in the fence.

“There are holes in the fence and he must’ve squirmed out of the fence. He had never been there, he’s never lived there,” said Luis Salgado of Animal Services.

A man found and brought the unidentified dog to Miami-Dade Animal Services, who called him Huggies for the little diapers he wears.

Local media put the seven-year-old dog’s photos on TV and asked for his family to come and claim him. Mireya’s granddaughter in Cuba saw a broadcast, and instantly recognized Puppy.

Mireya was overjoyed to be reunited with her special boy. She has had Puppy since he was a puppy. Three years ago his legs were paralyzed during an operation on a hernia, but she refused to have him put to sleep. She bought him a cart and diapers so Puppy could live life to the fullest.

“I buy all of his pampers in Costco. We take care of him and it’s not a burden to take care of him,” Mireya said. “He is the king in our family. He’s very intelligent, very loved.”

In the event that the Houdini-esque Puppy ever takes his wheels for a solo ride again, a microchip was donated to him.

“We’re going to donate the microchip to the dog so that if it ever gets lost again, or is found by somebody, it can be scanned and the microchip will come back with her information,” Luis said.

Puppy was so happy to be with Mireya again that he even turned down treats offered to him.