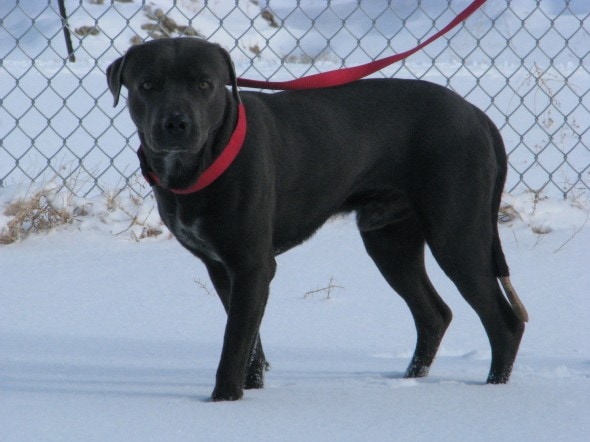 It’s one of those stories that tugs at the heartstrings.  Ghost was found on the side of a Wyoming highway and rescued by a passerby.  The person that found him assumed he had been hit by a car, but when the veterinarian checked him out it was discovered that he actually been shot, and left to die.

Ghost was actually lucky, because Katie Flock with the Carbon County Veterinary Hospital says he would have died if the bullet lodged a few inches to the left, lower or forward.  Rawlins animal control officer Rob Fall says the dog was shot with a .22 caliber weapon.

One month later thanks to the efforts of the veterinary team, Ghost has fully recovered from his ordeal and is ready to be adopted.  He was microchipped but when police tried to contact his owner they discovered he had moved to New Mexico, though the dog was reported missing before he moved.  The contact number they have is disconnected and so poor Ghost is on his own.

Ghost is still pretty scared of people, but hasn’t displayed any aggression at all.  Though he remains skittish, he will give you a cautious lick on your hands and face once he gets to know you.  He will need just the right home, where someone can be patient with him and give him the time and love that he deserves.  Anyone interested in adopting Ghost should contact the Rawlins Rochelle Animal Shelter for more information.

Don’t let Ghost stay alone for long, he is a sweet boy with a lot of love to give and has been through enough.  Now it is time for him to find his forever home.