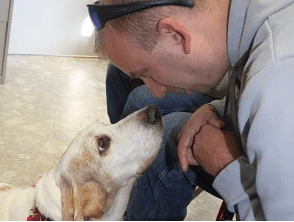 Call it fate, or destiny, but a basset hound named Ginger has been reunited with her owner after 10 years apart.   On a whim, Jamie Carpentier decided to check out a website he had never been on.  He had recently lost his boxer and had decided not to get another dog, but something made him peruse the listings of dogs up for adoption at the Humane Society for Greater Nashua.  That’s where he saw the posting for the dog he hadn’t seen in ten years, Ginger.

Carpentier got divorced 10 years ago, when Ginger was just 3 years old.  His ex-wife had custody of the dog and unbeknownst to him had surrendered her for adoption not long after.  Ginger was re-homed but recently her elderly owner could not care for her anymore and took her to the humane society, where she has waited for 3 months for a new home.

Even though there was no photo, when Carpentier read the ad describing the 13 year old hound his curiosity was more than he could bear.  “You always wonder what happened to the dog that… you had a long time ago; and you couldn’t keep it because something happened and you had to give her up,” said Carpentier.  After all these years could this be his Ginger?  And so it was.  When he called and described her the markings on Ginger matched those from the old photos he had saved and so he went to the Humane Society to see for himself.

“It was almost like she had never left my sight,” he said. “She got up as soon as she saw me, walked up to me, looking at me and started kissing me on the cheek.”  Fortunately Carpentier’s daughter and fiancee were both in favour of bringing Ginger home, to her last forever home with her first owner.  “I have her now and she has a place to live and stay,” he said. “The end. It’s awesome.”