After a few false starts, Archie has found his mission in life 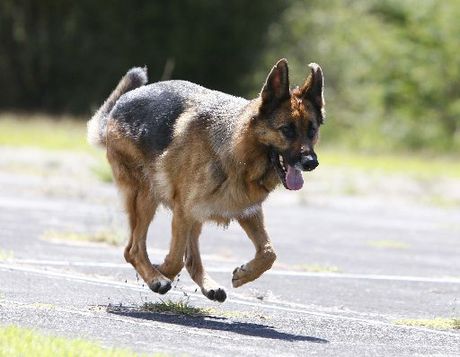 It took awhile, but Archie finally found his calling.  The 5-year-old pure-bred shepherd, along with his experienced handler Senior Constable Ross Clarke have just claimed the national title from the best sniffers in the narcotic business in New Zealand.  But for Archie, life didn’t have a great start and were it not for the devotion of Don and Elsa Nightingale who adopted him from the Alsatian Rescue Centre in 2008, he might be dead now.

Archie was first owned by a doctor, but was kept in a small, penned area and eventually wound up at the rescue at age 15 months.  That’s where the Nightingale’s found and adopted him, quickly discovering his love of tracking.  “He was so full of energy and he was fantastic at finding things. We taught him all the basic commands and he was quick to learn,” Mr Nightingale said.

Life was wonderful, until Archie killed a sheep that belonged to a neighbour.   The Nightingales knew that it was likely he would do it again.   “We knew we couldn’t keep him and having him put down was an option. But we approached Whangarei police dog handler Phil Kahotea to see whether he was suitable to be trained as a police dog,” Mr Nightingale said.

So, Archie got another new start training to be a frontline general duties dog with his handler, Mr Kahotea.  But things didn’t work out there either and suddenly Archie’s future was in question once again.  Then along came Auckland-based narcotic dog handler Ross Clarke, who needed a new dog and decided to give Archie a try.  The third time was the charm, and there has been no stopping the pair since they connected.  Together, in just three years, they have had more than 100 successful drug finds.

They are the winners of  the Narcotic Detector Championship title from teams from police, customs, corrections and aviation security, and scored the highest marks in locating white powders.  “He had success on his first job and it’s rolled on from there. He just loves working it’s all a big game for him,” said Mr Clarke, who has 42 years’ experience in the police and 32 years as a dog handler.  It just goes to show that a little patience and a lot of love may be just the right recipe for helping a dog find his way in life.