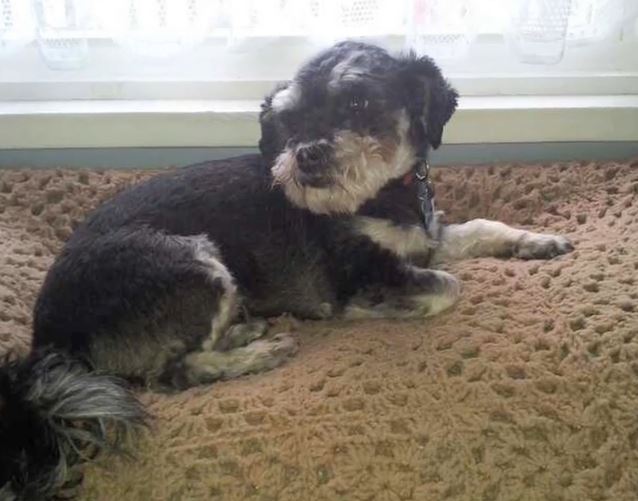 Here is Gingerbread’s story, from a life of extreme neglect to happiness in her forever home.

Gingerbread was near death and was practically skin and bone when she was found locked in a small closet in a bathroom, laying on top of her already-deceased sibling. Thanks to animal welfare officers visiting the house where she was kept on that day, December 21, 2013, when police attempting to serve a warrant on an unrelated matter saw potentially abandoned cats, she was rescued in time. One of the two officers says the emaciated little dog looked like a mophead to him at first sight. She tried to stand when the closet door was opened, but fell over, not having the strength to remain on her feet, and she was in shock, dehydrated and showing weak vital signs when she arrived at the shelter’s veterinary offices.

Gingerbread was rescued by the PSPCA (Pennsylvania Society for the Prevention of Cruelty to Animals).

PSPCA veterinarian JoEllen Bruinooge saw that the little dog was dying when the officers brought her in, and took Gingerbread home with her when she was still in critical condition at midnight. Despite her close brush with death, Gingerbread began to turn around and to regain her strength and health.

With TLC and restorative medical care, Gingerbread recovered and became a normal, healthy girl. Four months after her rescue, she found a wonderful forever home when shelter volunteer Megan Reilly realized she wold be the perfect pet for her grandparents, and says now: “She’s the princess that she was meant to be.”

In September, PSPCA celebrated the first anniversary of its Humane Litigation Department, which oversees the prosecution of animal cruelty charges entered by their Humane Law Enforcement team. In that year, they litigated roughly 200 cases with a 90% success rate, including convictions, guilty pleas, property dispositions and restitution.

Gingerbread’s case is cited among those victories, with its outcome of 2 years probation and prohibition of animal ownership for the woman who caused her suffering.

Caroline Nickel, 32, of the Pennsport section of Philadelphia, pled guilty to 5 misdemeanor counts of animal cruelty in Philadelphia Municipal Court, the counts including the neglect and emaciation of Gingerbread, the starvation death of the second dog, and the unsanitary conditions found throughout the house. Three underfed cats were found living in their own filth in the home. Nickel surrendered all of the animals to the PSPCA.

Speaking abot the case, Rebecca Glenn-Dinwoodie, Director of Humane Litigation at the PSPCA said: “No animal should have to endure such suffering. Both our officers and our shelter veterinarians acted quickly to ensure her survival. We are gratified by the Court’s sentencing order.”

Watch the story of Gingerbread’s rescue, recovery and adoption: