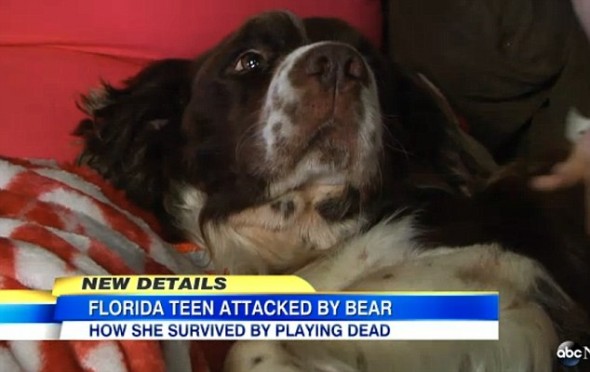 A 15-year-old girl and her family are crediting her dog for driving off an attacking bear in Franklin County, Florida.  She had been out walking her dog Ralph when the bear attacked, but with quick thinking she and her dog made it through this ordeal alive.

Leah Reeder was out with her dog Ralph at about 6pm for their evening walk when the bear attacked.  Leah decided to play dead, like she had been told to in so many safety classes when she was younger.

This didn’t completely get the bear off of her, and it was still pawing and scratching and biting at her.  This is where Ralph came in.

She recounted the harrowing story with news outlets from her hospital bed.  She tells of how the bear came out of nowhere and pushed her to the ground.  It then rolled her over onto her back, she was screaming the whole time.

“I guess nobody heard me,” said Leah.  “After I realized nobody was coming, I stopped screaming, and it started dragging me to the ditch.”

This is the time she remembered something she learned in school.  She played dead.

“In school they teach you to play dead.  I did just that, and it worked,” said Leah.  “It stopped biting me as soon as I stopped screaming.”

This is where Ralph came in to finish the job.  Ralph isn’t huge, coming in at just 25 pounds, but he did well.  After Leah went limp to play dead, Ralph started barking his doggie head off to get the bear to go away.

The creature was pushed back out of the way, fell backwards into a ditch and then took off running.  Leah decided to play dead for a short while longer, unsure if the bear would come back.  She was able to eventually make it to her father’s house where they called 911.

Who knows how long that bear would have stuck around if Ralph hadn’t run it off that day?  Leah is badly scrapped and cut up with some bites on her, but is very much alive, and thankful to her dog’s effort scaring away the much bigger bear.