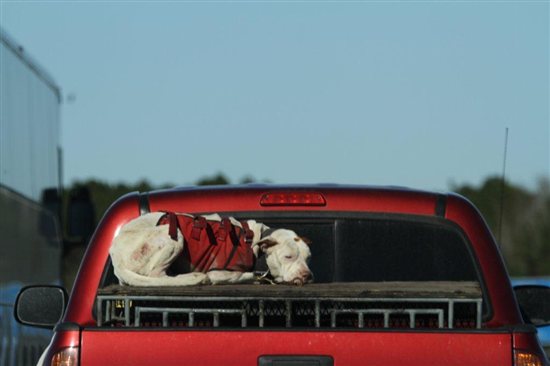 It must have quite a shocking sight to see while driving down the highway, a dog, clinging desperately to the top of a crate while the truck it was riding in sped down the road.  While the good samaritan who saw this was indeed shocked, she was able to get in behind and snap some pictures of the truck, the dog, and the license plate, possibly saving the lives of several dogs in the process.

The dog was underweight, wounded, and was tied in to the truck with a heavy chain.  It was also wearing a hunting vest.   As soon as she got home the woman contacted People for the Ethical Treatment of Animals (PETA) who’s Emergency Response Team traced the license plate to a county in Florida, a state that has a law against transporting animals inhumanely.

When police knocked on the door of the owner, a teenage boy, he admitted to using his dogs for hunting, and keeping them chained in the back of the truck.  He also agreed to turn over the dog, and five other dogs, and has been sentenced to 150 hours of community service for his crime.  The dogs have now been taken to a local shelter and are up for adoption.

Thanks to the good samaritan who took the time to take photos and contact PETA these 6 dogs have a chance at a happy life.  It is considered very dangerous to keep a dog in the back of an open pick up truck and it is prohibited to do so in some areas.  For information about how to travel safely with your pets go to PETA’s website.