Noya Deats has walked her dogs regularly along the Roza Canal in Moxee, Washington, but last Wednesday’s walk went awry when both dogs decided to take a dip and nearly drowned.

Fawn and Nina had never shown an interest in the water on previous walks, and Deats said her dogs have always been off-leash despite warning signs posted along the canal.

“Follow the signs, that’s what they’re there for,” said Roza Irrigation District assistant manager Tim Collett in an interview with the Yakima Herald. “Canals are very dangerous, especially if they are concrete lined like those up there. They’re very swift, and if critters or animals get in them, they can’t get out.” 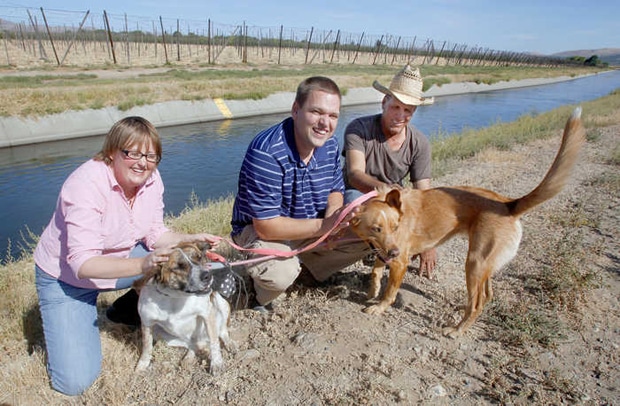 Which is exactly what happened to Fawn and Nina – once the thrill of diving in wore off, the dogs could not get back out of the canal, falling back after attempting to climb the slippery walls that line it. Terrified for their safety, Deats called her husband on her cell phone while running next to the dogs as the current swept them down the canal.

Her husband, Matt, arrived shortly thereafter, but not before Deats had covered two miles in pursuit of her dogs. “I was almost throwing up at that time,” she said. “I was running and talking on the phone at that time.”

Matt made a failed attempt to reach the dogs as a Yakima County Sheriff’s deputy arrived on the scene with a lasso. The deputy made a few throws with the rope but failed to connect with either dog: Fawn was swimming well and was a moving target, but Nina was tiring and struggling to stay afloat. The fate of both dogs seemed to hang in the balance when a stranger appeared from nowhere, taking the rope from the deputy.

Jesus Villanueva only speaks Spanish, but managed to say to the deputy, “Let me see.” The deputy did, and Jesus reached back in an arc, looping the rope around his head before making his first throw. It connected, as did his second attempt, and in a matter of moments, three miles from their point of entry, the dogs were pulled from the canal, drenched and exhausted.

54-year old Villanueva said he was was dumping agricultural chemicals into a container when he heard a noise, looked up and saw the deputy.

“I was amazed,” Noya Deats said. “He just kind of came out of nowhere. It was amazing how fast he lassoed them.”

Villanueva told a translator he was equally amazed. He said it had been thirty years since he had thrown a lasso on a cattle ranch he had worked at in Jalisco, Mexico, and he could not explain the fact that both throw were so precise.

The Deats say they are in debt to the stranger who rescued their dogs, and say they fully intend to leash the dogs on future walks. “We’re so happy (Villanueva) came along,” Matt Deats said. “One of our dogs looked like she wasn’t going to make it — then he pulled her out.”

Villanueva said helping was reward enough. “I felt happy, especially when I saw the woman who looked hot after running from far away,” he said.