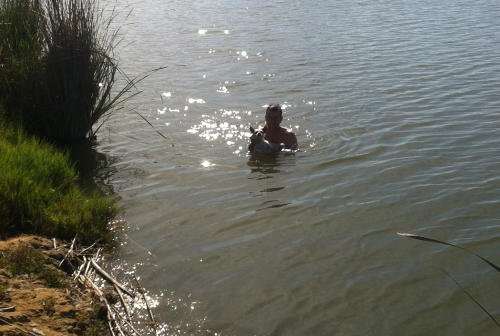 A Fairfax, California resident is being hailed as a hero after he dove into a pond to rescue a runaway Chihuahua from certain death.

Oakland resident Steve Atz was driving down a boulevard in Fairfax when he spotted a tiny dog trotting along unaccompanied.

“I followed it in my car and it kept going and going,” said Atz, a glassblower.  “It finally got to this area near the water and I got out of the car.”

Several others had started chasing this dog, too.  Patrick O’Brien, who had been in the area buying lumber, noticed the bustle around him and also got involved.

“This dog was tearing down the street and then jumped into the water,” said O’Brien, a photographer. “It just kept swimming and swimming and these geese started coming in and who knows what they were going to do to it.”

Worried that the dog might drown or be torn to shreds by the geese, O’Brien quickly removed his shirt and shorts and leaped into the chilly water to save the frightened dog.

“I just couldn’t let the dog drown,” he said.  “When I got to her she was freaking out and bit me a little, but I was able to get her back to shore.”

After the heroic rescue, it was decided that the pup should be taken to the nearby Marin Humane Society.  Fortunately, before she was taken in, her owner arrived at the scene to claim her missing dog.  She told the onlookers that she had just adopted the dog three days ago, and she had slipped out of her collar while they were out for a walk.

“It was a strange morning,” O’Brien said.  “Getting into the water was the last thing I thought I’d be doing.”