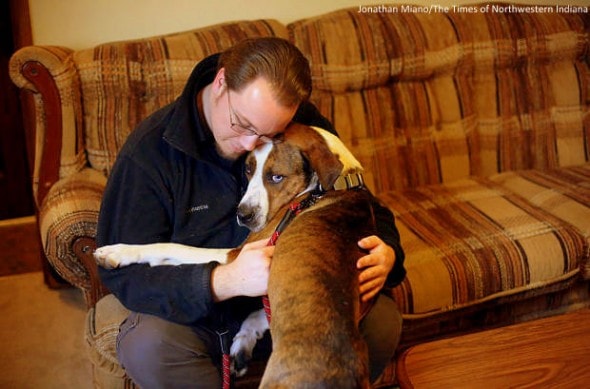 Northwest Indiana resident Andrea Kutzko was on her way home from work two weeks ago when she spotted a stray dog running in the midst of the blizzard that had struck. She stopped her car, and when he wouldn’t come to her, she ran all the way to her home with him following. Now the homeless Heinz 57 needs a family to adopt him.

Andrea was on her way home to Griffith from the PetSmart in Schererville, IN when she saw the dog, who likely would have frozen to death had she not stopped. She offered him some treats, which he happily devoured, but he lost interest when the snacks were gone. She couldn’t bear to leave him in the icy cold, but he wouldn’t get into her car, so she tried a different approach.

“As many dog owners know, the best way to get your loose dog to follow you is to run in the opposite direction,” Andrea explained.

She trudged through the snow, with the stray tagging along behind her, until she reached her home a few blocks away. She and her husband Nick put the dog in the garage, and called him Buddy. 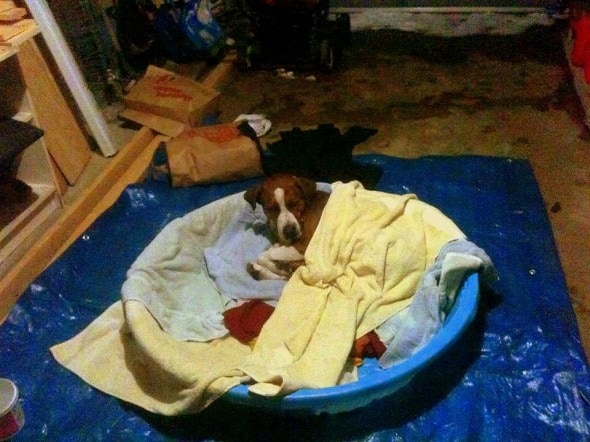 He has to be kept in the garage until a permanent home can be found, because they already have a dog, and soon discovered that the stray has some behavioral issues. The couple set him up with a cozy bed and bought a space heater to keep him toasty. While the garage isn’t ideal, it is only temporary, and is far better than allowing him to fend for himself on the cold streets.

Andrea, who has worked with the Lake County Animal Care & Control office and the Treasured Friends rescue, contacted the organizations, but both are at capacity. She set up a Facebook page called Buddy and the Blizzard, in hopes of finding a rescue, foster or adoptive family.

“I’m not going to let him be euthanized,” she said.

Buddy appears to be a pit bull mix of some kind, but what kind of breeds he comes from is a mystery. The 70-pound dog has one blue eye and one brown. 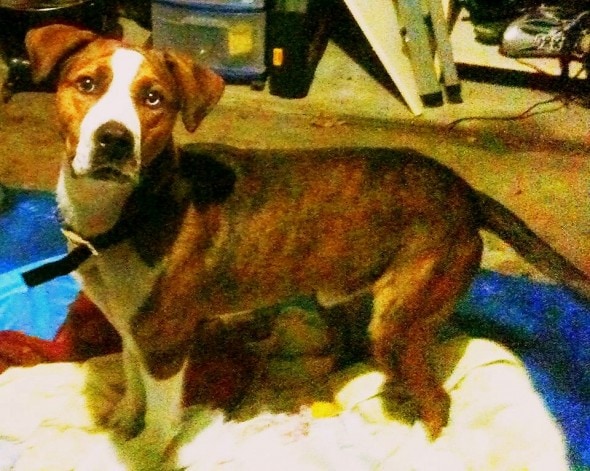 “This is the kind of dog you’d love to do a DNA test on to see what exactly is in there,” Andrea said. “He is a true mutt.”

Buddy is a silly and sweet dog, but does have some issues that can be worked out. He will flourish in a home experienced with dogs, with no other animals or small children, at least until he becomes accustomed to a new life. He may have had some really horrible experiences that led to him being outside on his own, but given time with the right person, he will be an excellent companion.

“He has some issues, but he is improving day by day,” Andrea said. “He has blossomed in the almost two weeks we’ve had him and is picking up on things really quickly. I have a lot of hope for him.”