A humble hero is being celebrated for risking his own safety to save a stranger’s dog from the tangled, burning wreckage of a horrific automobile accident. Dan White says that his actions were not extraordinary, but a very thankful dog owner begs to differ. 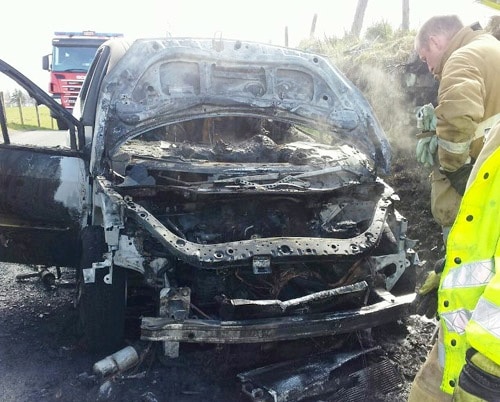 Ciara Hartley crashed her car while negotiating the narrow, hilly road back to her home in West Lothian, Scotland. The damaged vehicle began to burn on impact, filling with thick smoke and forcing her to abandon it. Hartley was able to pull her daughter from her car seat and move her a safe distance from the fire, but still trapped in the car was her beloved Jack Russell, Izzy. Hartley feared that her companion would perish in the blaze – but fate had other plans for Izzy.

“I managed to stop the car and get Amber (her daughter) out and was standing there not knowing what to do when, thankfully, a car stopped.”

Dan White was out for a drive after a long day of work when he happened upon the accident scene. He said instinct kicked in when he heard about the trapped pet.

“I work from home so I had gone out for a drive to clear my head when I saw Ciara and loads of smoke coming from her car,” he said. “I stopped to see if I could help and she told me about the dog, so I went and got her.”

Risking his personal safety, White jumped into the burning wreckage and managed to free the dog. Hartley said she was amazed to see him emerge from the car with Izzy. Just seconds after escaping, the vehicle burst into flames and was completely engulfed. Help had arrived just in time.

“Just after he got Izzy out, it really caught fire, so he got us into his car and moved it well away from my car to make sure we were safe,” said Hartley. “I called my family and the fire brigade and Dan stayed with me until he was sure that we were all OK.”

White, a dog lover himself, said he was just doing the right thing, and downplays his role in the rescue. “I really don’t think that I did very much really. Ciara said I kept her calm, but I think she was only panicking because she was by herself,” he said.

Hartley, however, says she would have lost a best friend were it not for White, and is insistent that he be recognized for coming to the aid of a stranger in need. “I really don’t know what I would’ve done without him. He was a real hero.”